Here's everything you need to know about the brand new OnePlus smartphones.

The lone 8GB RAM/256GB storage variant of the OnePlus 7T Pro is priced at Rs 53,999 in India and it will be available via an early access sale tomorrow at 12pm IST. The early access sale will be limited to OnePlus exclusive stores across 8 Indian cities. Starting October 12, open sales of the OnePlus 7T Pro will begin on Amazon India and OnePlus retail stores. The handset is available in a lone Haze Blue colour variant.

Coming to the OnePlus 7T Pto McLaren Edition, the device is available in a single 12GB RAM/256GB storage variant that costs Rs 58,999 in India. You can pre-book the handset starting tomorrow at a cost of Rs 5,000 via OnePlus exclusive stores. The open sale of the device will start on November 5 via Amazon India, OnePlus offline and online stores.

For imaging duties, the OnePlus 7T Pro handset comes with a triple rear camera setup that comprises of a 48MP primary camera, an 8MP telephoto lens that offers 3x zoom, and a 16MP ultra-wide lens that has a field of view of 120-degrees. Besides this, the smartphone features Dolby Atmos speakers. 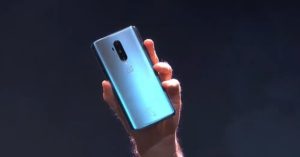 The smartphone also comes with exclusive live wallpapers. Besides this, the case of the smartphone is made up of Alcantara, which is a fabric that is claimed to offer durability and unparalleled grip. Even the charging cable that comes in the box of the handset is Orange in colour and not Red. While most other specifications of the device are the same as OnePlus 7T Pro, it comes with 12GB of RAM and 256GB of UFS 3.0 storage.

Avani Baggahttp://www.gadgetbridge.com
Avani has an immense love for reading, travelling and food, but not necessarily in the same order. Avani almost started pursuing law, but life had other (better) plans for her and she chose to be a writer instead (luckily!) She previously covered technology at Times Internet and wrote about smartphones, mobile apps and tech startups. When she’s not writing, you’ll be able to find her in book stores or catching up on her social life.
Facebook
Twitter
WhatsApp
Linkedin
ReddIt
Email
Previous article
Launched in India: Samsung Galaxy Tab S6, Galaxy Watch 4G LTE and Galaxy Watch Active 2
Next article
Nokia 6.2 to launch in India today, will be available via Amazon: Everything you need to know