OnePlus, Oppo, Xiaomi and more will come with Snapdragon 888-powered flagship phone in the first half of 2021

The Chipset was launched during the virtual launch event of the Snapdragon Tech Summit 2020. 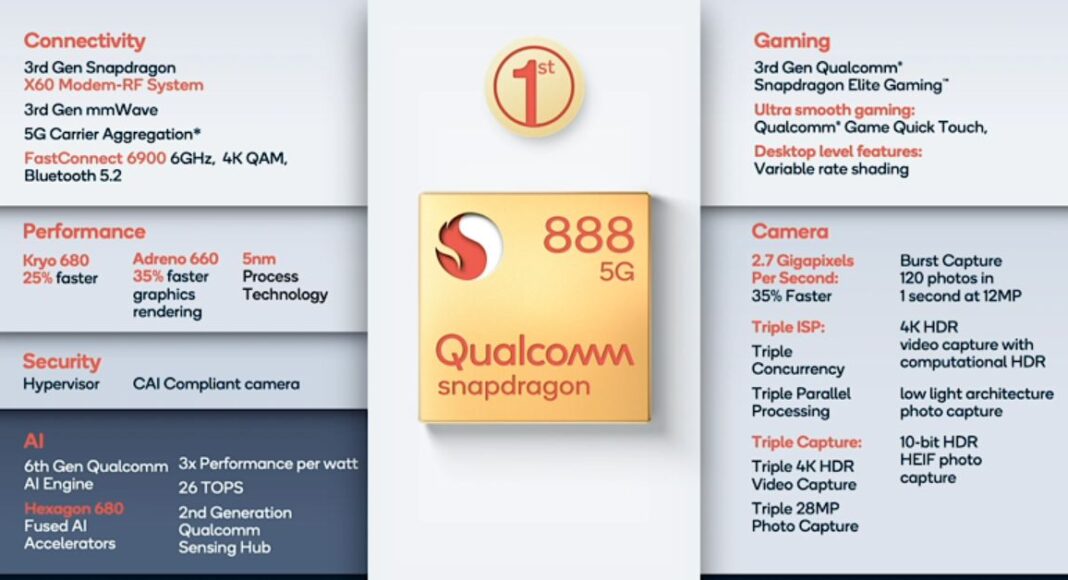 The American chipset maker, Qualcomm, recently launched its next-generation flagship system-on-chip (SoC) Snapdragon 888 5G for premium smartphones. The SoC was introduced during a virtual launch event of the Snapdragon Tech Summit 2020. Immediately after the announcement many of the prominent brands such as Oppo, Xiaomi, and others have announced that they are planning to introduce new devices with the latest QC chipset.

Just after the announcement of the Qualcomm Snapdragon 888 5G SoC was made, Oppo was the first brand to confirm its upcoming Find X3 series will be using the latest chipset in the first quarter of next year. The company confirmed during a press event that it is planning to launch the next Find X series in 2021 as its first 5G device powered by Snapdragon 888 5G.  Oppo Vice President and President of Global Sales Alen Wu stated, “We are sure that the next Find X series will deliver an extraordinary all-round experience to users around the globe.” However, the company did not open up anything more about its next flagship with a 10-bit full-path colour management system for the display.

The next on the list is Realme, the Chinese smartphone company that has committed to bringing Realme Race to India by next year at the Qualcomm Snapdragon Tech Summit 2020. The device is going to use Snapdragon 888 SoC that will enhance the gaming as well as video quality of the device with 5G connectivity.

Earlier the device was rumoured to come with Snapdragon 875 but after Qualcomm’s announced the company was the first among others to announced its next flagship to use Snapdragon 888 5G. According to a report the chipset will be paired with 12GB of RAM and 256GB of storage. The device will run  Realme UI 2.0 on top of Android 11. The publisher has also shared an image of the phone revealing the design of the device with a “duad camera with an “Oreo” style bump”.

On the other hand, Nubia sub-brand Red Magic has also confirmed that its next that is Red Magic 6 will feature the Qualcomm Snapdragon 888 SoC. The company President Ni Fei took to Weibo to share the launch details of its premium device with gaming capabilities. Also, Nubia Z will also be powered by Qualcomm Snapdragon 888 SoC. ZTE which is the parent company of Nubia has also announced to launch ZTE Axon 30 powered by the same 5G chipset. The device is claimed to capture photos and videos at up to 2.7 gigapixels per second.

Also, Xiaomi Mi 11 flagship will be based on 888 SoC. The Chinese company’s Co-Founder and CEO Lei Jun this during the Qualcomm Snapdragon Tech Summit 2020. The device is likely to be introduced in the first half of 2021.

The OnePlus Design Director Hope Liu shared a video on the Chinese microsite promising to bring its next flagship, the OnePlus 9 series to be based on Snapdragon 888. He said, “We believe that the technological innovation of this flagship platform in 5G, games, camera, and other aspects will contribute to the high-end flagship to be launched by OnePlus in the first half of next year.”

Komila Singhhttp://www.gadgetbridge.com
Komila is one of the most spirited tech writers at Gadget Bridge. Always up for a new challenge, she is an expert at dissecting technology and getting to its core. She loves to tinker with new mobile phones, tablets and headphones.
Facebook
Twitter
WhatsApp
Linkedin
ReddIt
Email
Previous articleTwitter updates its rules against hateful conduct on its platform
Next articleFAU-G online action game crosses 1 million pre-registration mark