The special edition phone will be available via Amazon 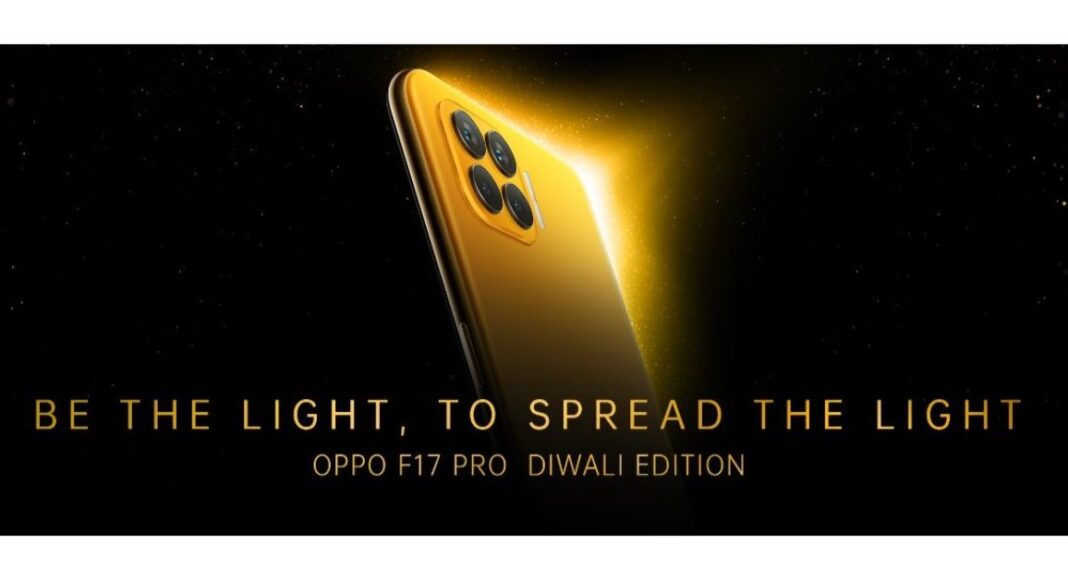 Earlier last month the Chinese smartphone company introduced Oppo F17 and Oppo F17 Pro. And today the company is all geared up to launch Oppo F17 Pro Diwali Edition today in India. The limited-edition phone will be available exclusively for the Indian customers. The specification of the device is assumed to be identical to the regular Pro variant from the series though some major changes can be expected as it is going to be a special edition phone. Apart from this in China, today the company will also launch Oppo smart TV at the same time and it has also shared some official teaser that will market the company’s entrance in the smart TV market with a pop-up camera.

In a new development, the company also shaded some of the exclusive images via its social media channel and website. The teasers show that the Oppo F17 Pro Diwali Edition will come in a Matte Gold colour. Ahead of the official launch, the special edition phone was also listed on Amazon to tease its availability. The microsite gives a better look at the Diwali that will have a clean finish and will not have the vertical stripe like the other variants. The device can be seen donning gold aqua dual finish on the back panel. The new variant will join Magic Black, Magic Blue, and Metallic White colour options.

As far as the specifications are concerns The F17 Pro Diwali Edition is likely to share specs with the regular Pro variant. Whereas the pricing of the phone is also expected to be the same. To recall Oppo F17 Pro was launched in India in a single 8GB of RAM with 128GB of storage priced at Rs 22,990

Apart from the phone, the company is also set to enter the Smart TV market with the launch of Oppo smart TV. Besides sharing an official teaser, the company doesn’t provide any specific details of the TVs but the Compulsory Certification of China (3C) listing suggests it to come in 55 and 65-inch screen sizes and likely have at least 10 models each. It is also suggested to offer a pop-up camera for video conferencing purposes. The Oppo Smart TVs are said to include a Quantum Dot display panel along with 4K resolution and 120Hz refresh rate. The speakers are likely to be tuned by Bang & Olufsen.

Komila Singhhttp://www.gadgetbridge.com
Komila is one of the most spirited tech writers at Gadget Bridge. Always up for a new challenge, she is an expert at dissecting technology and getting to its core. She loves to tinker with new mobile phones, tablets and headphones.
Facebook
Twitter
WhatsApp
Linkedin
ReddIt
Email
Previous article
Nokia 5.3 Review: Good battery life and stock Android experience
Next article
Google Trusted Contacts mysteriously pulled down from both Google Play store and the Apple’s App Store