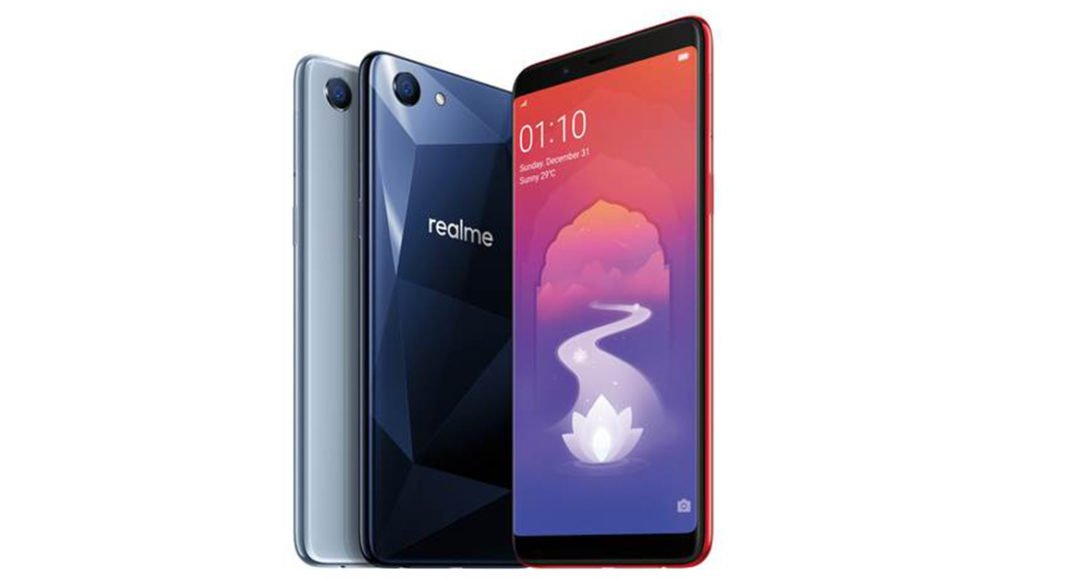 Chinese smartphone maker Oppo has today unveiled its new smartphone series in India called Realme. The company has launched its first smartphone under the new series — Oppo Realme 1. We don’t blame you if that somewhere reminded you of Xiaomi’s Redmi series, A) because of its name and B) the specifications and pricing of the smartphone is very similar to the recently launched Redmi Note 5 Pro.

For its Realme series, Oppo is highlighting the fact that the range has ‘real products at real price.’ The Realme series of Oppo is aimed at the Indian youth and will be available only on e-commerce channels.

The company is touting Oppo Realme 1 smartphone as a ‘Made in India’ product and has styled the it with ‘glossy diamond-cut design’, which we have previously seen  on the Oppo F7 Diamond Black edition. Also, it is refreshing to see that Oppo has not incorporated the iPhone X-like notch in its Realme smartphone.

Oppo Realme 1 is dual SIM smartphone that runs Android 8.1 Oreo skinned with ColorOS 5.0. It features a 6-inch full-HD+ display and is powered by MediaTek’s 12nm octa-core Helio P60 processor. It comes with aforementioned RAM and storage variants and houses a 3,410mAh battery with AI support. For more storage, users can also install microSD cards in the device.

For imaging duties, Oppo Realme 1 sports a 13MP rear camera and an 8MP selfie camera. The camera app of the smartphone has support for AR stickers, which can be applied on pictures taken from either of the two cameras. Furthermore, the camera app of the smartphone also comes with Oppo’s AI Beauty 2.0 technology. This not only beautifies the selfies taken from the device, but also offers 296-point facial recognition. Interestingly, the smartphone comes with a Face Unlock feature, but lacks a fingerprint sensor.

The company is also saying that Oppo Realme 1 comes with dual 4G VoLTE support and has an AI Board assistant in it. The device can supposedly endure extreme weather conditions ranging from -15 degrees to 55-degree Celsius for a period of 7 days.

Oppo Realme 1 comes in three variants — 3GB RAM/32GB storage, 4GB RAM/64GB storage and 6GB RAM/128GB storage. They are priced at Rs 8,990, Rs 10,990 and Rs 13,990 respectively. The phone will be available to buy in Diamond Black, Moonlight Silver, and Solar Red colour options. However, if you are planning to buy the Moonlight Silver coloured Oppo Realme 1, you will have to wait till June.

The smartphone will exclusively be available on Amazon India’s website and its first sale will be held on May 25 at 12pm IST. Note that only 6GB RAM/128GB and 3GB RAM/32GB storage variants of the phone in Diamond Black and Solar Red colours will be available in the sale. The 4GB RAM variant will be available later this year.

Over that, buyers will get Reliance Jio benefits of up to Rs 4,850 and if one has a SBI card a 5% cashback on the smartphone can be availed, too.

Avani Baggahttp://www.gadgetbridge.com
Avani has an immense love for reading, travelling and food, but not necessarily in the same order. Avani almost started pursuing law, but life had other (better) plans for her and she chose to be a writer instead (luckily!) She previously covered technology at Times Internet and wrote about smartphones, mobile apps and tech startups. When she’s not writing, you’ll be able to find her in book stores or catching up on her social life.
Facebook
Twitter
WhatsApp
Linkedin
ReddIt
Email
Previous article
Honor 10 smartphone with AI powered cameras launched in India: Price, specs and more
Next article
How to watch OnePlus 6 launch Live Stream today