The discount is applicable for a limited period 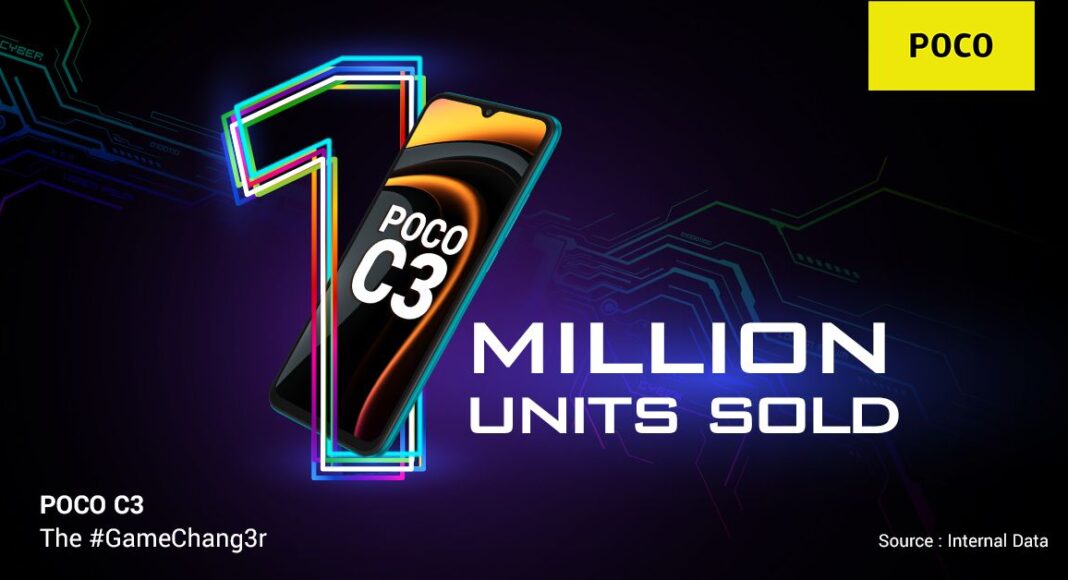 Xiaomi’s spin-off Poco last year in October launched Poco C3 in India. The smartphone comes under the budget segment and debuted in the country as a tweaked variant of Redmi 9C. The company has now announced that it has sold over 1 million units of smartphones. The device is powered by MediaTek Helio G35 SoC. Other key specs of the mobile phone include HD+ display, triple rear cameras and more.

Poco C3 has surpassed the one-million sales mark in a span of three months from the date of its launch. To recall the device was launched in India in October 2020 and now the company is offering the mobile phone at a discounted price which will be applicable till January 24.

As a limited period offer Poco C3 will be available at a special discounted price of Rs 7,999 and Rs 6,999 for the 4GB RAM with 64GB storage and 3GB RAM with 32GB storage option respectively, along with additional bank offers. The phone will be available for purchase via Flipkart. According to the company, buyers can effectively purchase POCO C3 for Rs 6,299 for the 3GB/32GB variant, and Rs 7,199 for the 4GB/64GB variant (with bank offers included) until January 24.

Poco C3 comes with a 6.53-inch HD+ LCD waterdrop-style notch display with 720×1,600 pixels of resolution and a 20:9 aspect ratio. It runs MIUI 12 for Poco on top of Android 10. Under the hood, there is an octa-core MediaTek Helio G35 chipset coupled with up to 4GB of RAM and 64GB of onboard storage. The internal storage can be expanded up to 512GB using a microSD card.

There is a 5,000mAh battery with 10W fast charging support and is P2i-rated for splash-resistance. For connectivity, there is a 3.5mm audio jack, 4G LTE, Wi-Fi, Bluetooth, and Micro USB port for charging.

Komila Singhhttp://www.gadgetbridge.com
Komila is one of the most spirited tech writers at Gadget Bridge. Always up for a new challenge, she is an expert at dissecting technology and getting to its core. She loves to tinker with new mobile phones, tablets and headphones.
Facebook
Twitter
WhatsApp
Linkedin
ReddIt
Email
Previous articleLG 32UN880-B UltraFine Display Ergo 4K monitor with HDR10 support launched in India
Next articleMicrosoft Surface Laptop Go With 10th-Gen Intel Core i5 processor launched in India