The smartphone is confirmed to be powered by Snapdragon 870 SoC. 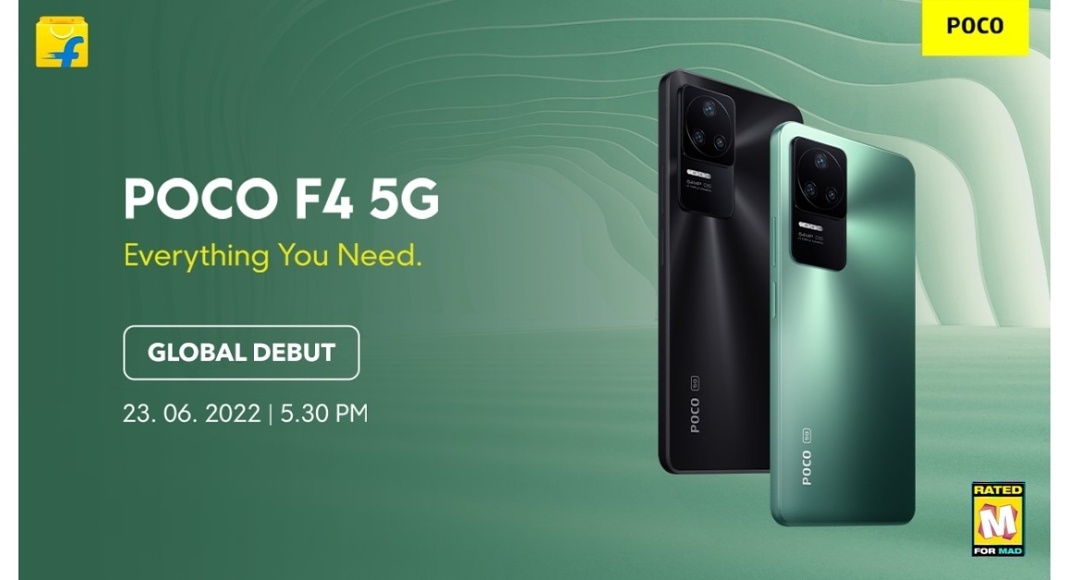 Poco India has officially confirmed the Poco F4 5G’s launch date. The smartphone’s launch date has been slated for June 23 in the country. The device’s global launch is also going to happen on the same day. Qualcomm has already stated that the Snapdragon 870 chipset will be released. A teaser for the smartphone has also been revealed, confirming similarities between the Poco F4 5G and the Redmi K40S. According to previous rumours, the upcoming phone would be a rebranded edition of the Redmi K40S.

Poco confirmed the launch date of the upcoming Poco F4 5G smartphone. The Chinese smartphone brand also confirmed that the smartphone will go on sale in India on June 23 at 5:30 p.m. The event will be live-streamed on the company’s YouTube account.

Furthermore, the company has posted a teaser of Poco F4 5G verifying a triple rear camera configuration, including a 64-megapixel primary sensor with optical image stabilisation (OIS). Resolution details about the remaining two camera sensors are yet to be confirmed. With the same camera module design and gradient finish as the Redmi k40S, the smartphone appears to be pretty comparable.

The teaser also claims that the Poco F4 5G would have an IP53 rating, indicating that it will be splash resistant to some extent.

The Poco F4 5G is claimed to have LiquidCool 2.0 in addition to a Snapdragon 870 SoC. In fact, the smartphone was previously revealed to contain up to 12GB of RAM and 256GB of storage, as well as three colour variations.

The price details had already been exposed by an information leak. The POCO F4 will be sold in a single form worldwide for $459, which translates to Rs 35,000, according to the poster.

According to rumours, it could simply be a repackaged Redmi K40S. The Poco F4 5G will be powered by Qualcomm’s Snapdragon 870 SoC, according to the manufacturer. The Redmi phone has the same Snapdragon 870 processor as the Xiaomi phone, as well as a triple-camera setup and a 120Hz AMOLED display. Outside of its home market China, the company has a history of releasing rebranded Redmi smartphones. The Poco F4 GT, a rebranded version of the Redmi K50 Gaming Edition that launched in Europe in April, is one of the most recent examples of how the business typically launches rebranded Redmi phones in India and other areas under its own brand name.

Komila Singhhttp://www.gadgetbridge.com
Komila is one of the most spirited tech writers at Gadget Bridge. Always up for a new challenge, she is an expert at dissecting technology and getting to its core. She loves to tinker with new mobile phones, tablets and headphones.
Facebook
Twitter
WhatsApp
Linkedin
ReddIt
Email
Previous article
Amazon Quiz Answers Today 17 June 2022: Participate to win Rs 20,000
Next article
Why Should You Clear Your Android Phone’s Cache and Cookies?