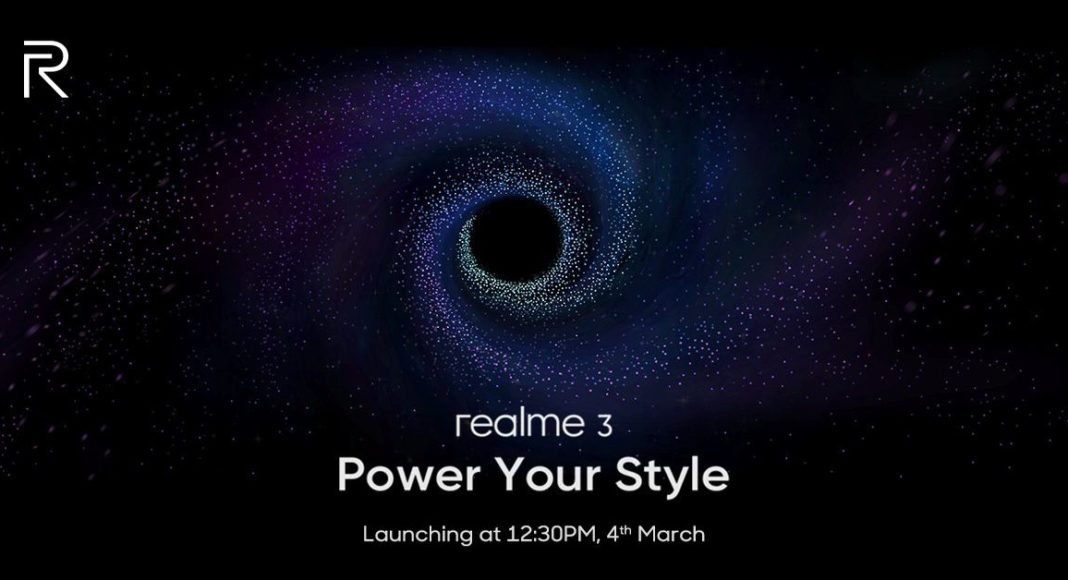 Realme is all set to launch its next flagship device – Realme 3 smartphone – in India. The company will be hosting the Realme 3 launch event in the country on March 4 and it will begin at 12:30 pm IST. This information has been confirmed by Realme, as it comes from the invite that they have sent to tech press in the country indicating that there is a launch scheduled in New Delhi.

Realme has also been teasing the upcoming smartphone via its social media channels. Realme 3 has been teased to come with a dual rear camera setup and is likely to be powered by the MediaTek Helio P70 processor.

Realme also posted an image on its official Twitter account which highlights that the launch will begin at 12.30 pm IST on March 4. As we mentioned earlier, besides posting the invite on its social media, Realme also sent it out to media confirming that the launch event will be held in New Delhi on the said date.

As of now, Realme has not given too much information about its upcoming smartphone. However, we know from the teaser that Realme 3 will come with a dual rear camera setup. It is also being reported that the device will come with a diamond cut case and will house a rear-mounted fingerprint scanner.

Furthermore, it has also been reported earlier that Realme 3 smartphone will be available in two processor variants. While the variant that will be launched in India will be powered by MediaTek Helio P70 SoC, the model that will be launched globally will come with Helio P60 chipset. The smartphone is also rumoured to come with an aspect ratio of 16:9 and will have support for Bluetooth v4.2.

Look at the sky, the stars are unwrapping something celestial. Witness the launch of #realme3 #PowerYourStyle live on 4th March on our official handles and be a part of the cosmic event. Find out more at https://t.co/HrgDJTZcxv pic.twitter.com/gG0l0ZnBm1

We should mention that Realme 3 will be the successor of the Realme 2 smartphone that was launched in India in August last year. Realme CEO Madhav Sheth also revealed last month that the smartphone will be launched during the first quarter of 2019. He further said that the company has been working on a smartphone with a 48MP primary camera, however, as of now, it cannot be said if the sensor would be present in the Realme 3 handset.