The company will be launching Realme 7 Pro and Realme 7 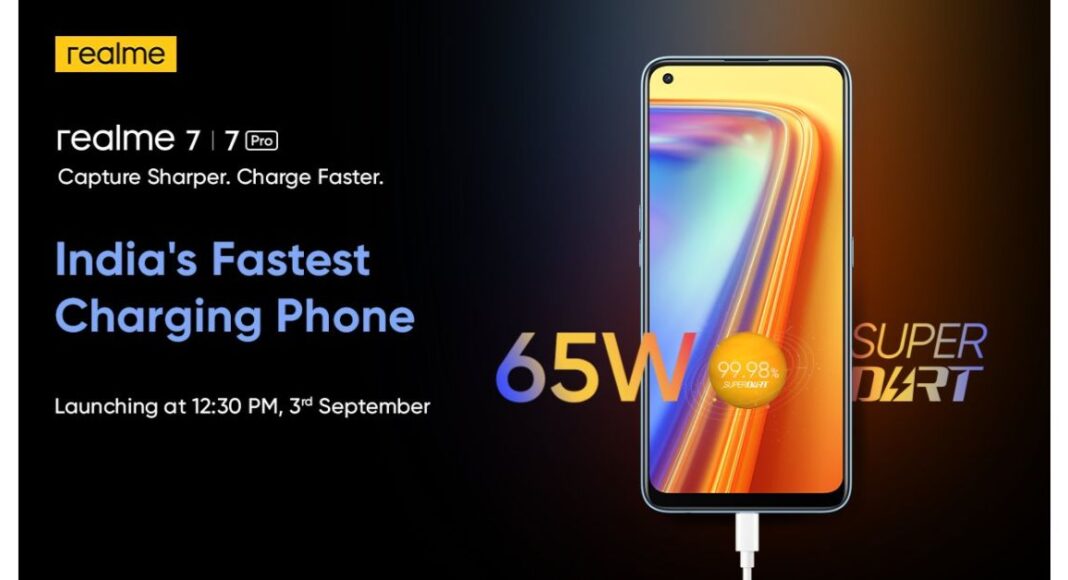 Ahead of its September 3 launch in India, Realme 7 series specifications have been leaked on the web. The Pro variant is slated to come with Snapdragon 720G SoC and a 4,500mAh battery with 65W fast charging support. The company is going to introduce two new smartphones under the series Realme 7 Pro and Realme 7. In addition to this, the company’s CEO Madhav Sheth has also added Faster7 to its Twitter handle name.

Realme 7 Pro and Realme 7 are now confirmed to launch in India on September 3. The company will be hosting a virtual event to unveil the device that will be live-streamed across all its social media channels via its official YouTube channel at 12.30 PM IST. The company took to its Twitter account to confirm the release date along with a poster image to tease the 65W SuperDart fast charging technology that would come to Realme 7 and Realme 7 Pro. Apart from that, the device will feature a hole-punch design display.

Meanwhile, the device is also being teased via Flipkart to show off its availability. The dedicated microsite created on the Portal depicts that the device has cleared the TUV Rheinland Smartphone Reliability Verification. Also, it can deliver up to 3.5 hours of voice calling or 13.2 hours of music playback when charged for just three minutes.

Prior to its official launch in the country, the specifications for the Realme 7 Pro have been leaked by a tipster Mukul Sharma via Twitter. He claims that the smartphone will come with a 6.4-inch full-HD+ Super AMOLED display having 1,080×2,400 pixels of resolution. In addition to this, there will be a hole-punch design display to encompass the selfie camera. Additionally, the phone will be powered by the Qualcomm Snapdragon 720G processor paired with 6GB of RAM with 128GB of storage and an 8GB of RAM with 128GB of internal memory option.

Citing the information from the tipster in terms of cameras the device will sport a quad-camera setup on the back of the phone which is expected to include a  64-megapixel IMX682 sensor with  f/1.8 aperture, an 8-megapixel ultra-wide-angle lens with 119-degree field of view (FoV) and f/2.3 aperture, a 2-megapixel black and white portrait and a 2-megapixel macro lens. On the front, it is said to include a 32-megapixel selfie camera with f/2.5 aperture and 85-degree FoV.

In addition to this, he also mentions that Realme 7 Pro will boast a 4,500mAh battery supported by a 65W fast charging which we are already aware of. Also, it might come with dual stereo speakers. The mobile phone will measure 160.9×74.3×8.7mm and weigh 182 grams.

Komila Singhhttp://www.gadgetbridge.com
Komila is one of the most spirited tech writers at Gadget Bridge. Always up for a new challenge, she is an expert at dissecting technology and getting to its core. She loves to tinker with new mobile phones, tablets and headphones.
Facebook
Twitter
WhatsApp
Linkedin
ReddIt
Email
Previous article
Fitbit Sense: This health smartwatch carries Stress, ECG and skin temperature sensors
Next article
Samsung Galaxy M51 India launch teased via Amazon