Redmi K30 has been part of the speculations and leaks on the web for quite a while now. As per the latest leaks, the phone is likely to come with a dual hole-punch display and a circular rear camera module. In the latest development, the company has now shared few images of the Redmi K30 revealing more details about its cameras along with some camera samples. Additionally, the phone has been spotted on TEENA’s website revealing its specifications also. It will make its debut on December 10.

Xiaomi’s sub-brand Redmi has posted a teaser image of Redmi K30 confirming that the phone will be featuring a 64-megapixel camera. It is said to be the world’s first to sport the latest generations of Sony IMX686 sensors. The quad rear camera setup will further come with a wide-angle sensor with a 120-degree field of view, a 2cm macro lens and a depth sensor for portraits. The handset will also include an AI-powered 20-megapixel camera sensor and a depth sensor on the front for taking selfies.

In addition, the Chinese smartphone company also shared a number of camera samples on Weibo revealing the camera features. Also, the Chinese firm shared a video of the images clicked giving us a fair idea about the image quality Redmi K30 series will deliver.

The company has shared zoomed-in images of a miniature sofa, motorcycle, eyes, mini skateboard and much more. The shared images showcase that the articles shown in the image are zoomed-in is clear and detailed. 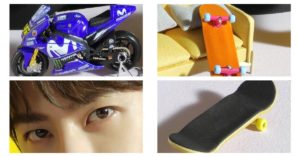 The internal storage can be expanded up to 512GB using a microSD card. According to the listing, the handset will feature a 6.67-inch full HD+ display with 1,080×2,400 pixels of resolution. Redmi K30 is likely to be powered by an octa-core SoC clocked at 2.2GHz. The listing further reveals that the phone will be backed up by a 4,400mAh battery. The smartphone in all probability weigh 208 grams and measure 165.3×76.6×8.81mm.

Komila Singhhttp://www.gadgetbridge.com
Komila is one of the most spirited tech writers at Gadget Bridge. Always up for a new challenge, she is an expert at dissecting technology and getting to its core. She loves to tinker with new mobile phones, tablets and headphones.
Facebook
Twitter
WhatsApp
Linkedin
ReddIt
Email
Previous articleGarmin launches 2 new Smart watches: The Venu and the Vivoactive 4
Next articlePUBG Mobile to run at 90 fps soon, all thanks to Qualcomm