HomeMobilesRedmi Note 8 series of smartphones might be launched alongside Redmi TV...

Some leaked images of the mobile phone have also surfaced online

Recently Redmi’s General Manager shared a teaser of the most awaited smartphone by Xiaomi called Redmi Note 8 along with a concept-based render. And now the company has revealed the details of the upcoming device by the company’s sub-brand. The new Redmi Note 8 series of smartphones will arrive with a high screen-to-body ratio along with a bigger battery and better camera capabilities.

In addition to this, a live image of Redmi Note 8 has surfaced on the web displaying the rear panel of the device giving us the first glimpse of the smartphone sporting a glossy black finish.

Xiaomi’s sub-brand’s executive shared the details of the Note 8 on his Weibo account. According to the post, Redmi Note 8 phone might arrive with a 64-megapixel camera. To support this Weibing recently shared a short video revealing that the upcoming smartphone will be featuring a quad rear camera along with a 64MP sensor. The sensor will be supported by the Samsung ISOCELL Bright GW1 that the company confirmed the Note 8 will come with. 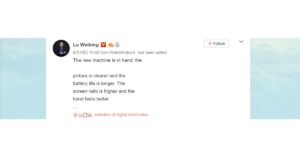 Now the General Manager has also revealed that Redmi Note 8 will offer a longer battery life, which means a bigger battery. He also mentioned that the successor of the Redmi Note 7 will come with a higher screen-to-body ratio. This hints that the smartphone might feature a pop-up selfie camera, too.

On the other hand, Weibing also teased that Xiaomi will launch a 70-inch TV at an event to be held in China on August 29. In addition to this, SlashLeaks has also shared some alleged images on the Redmi Note 8. The images shared revealed the blueprint of the smartphone. As per the leaked images, the phone will be featuring a quad rear camera set up. The back panel of the device has a glossy black finish along with curved edges. Over that, the bottom of the phone features a 3.5mm headphone jack, a microphone hole, speaker and a USB Type-C port.

Komila Singhhttp://www.gadgetbridge.com
Komila is one of the most spirited tech writers at Gadget Bridge. Always up for a new challenge, she is an expert at dissecting technology and getting to its core. She loves to tinker with new mobile phones, tablets and headphones.
Facebook
Twitter
WhatsApp
Linkedin
ReddIt
Email
Previous articleHow to reset your Android smartphone before you sell it
Next article[Video] Samsung Galaxy Note 10+ detailed unboxing and overview