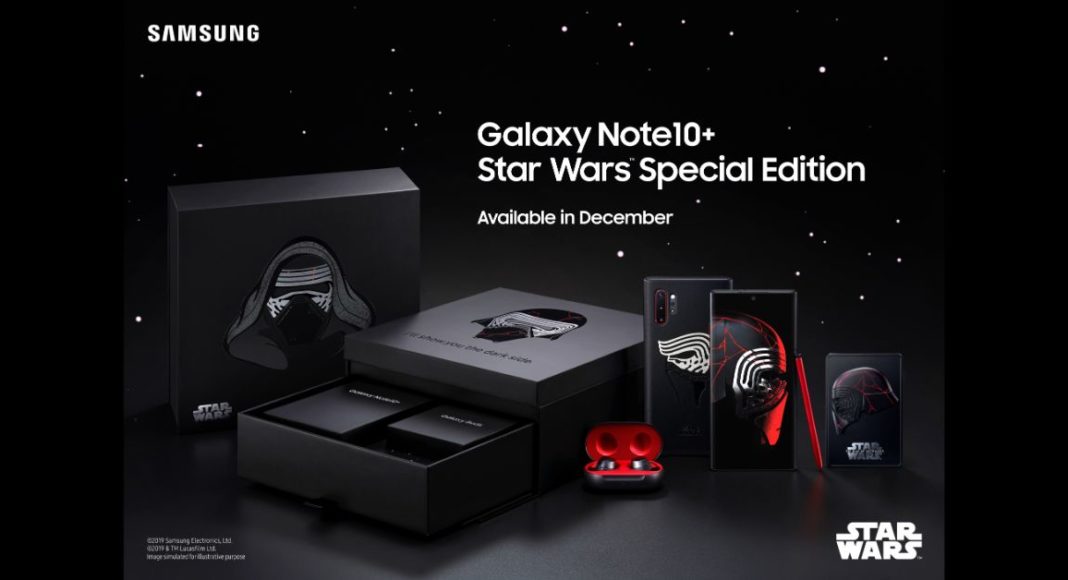 The South Korean smartphone manufacturer Samsung in the month of August globally launched its new edition of Samsung Galaxy Note 10 series a dedicated launch unpacked event. The company launched two devices under the series Galaxy Note 10 and Note 10+. Now the company has announced the launch of another special edition of the premium smartphone ahead of the release of Star Wars: The Rise of Skywalker. The movie will release on December 20 and to celebrate the release the company has teamed up with the filmmaker by launching a special edition Galaxy Note10+, featuring Star Wars-inspired design elements and digital content.

The special edition of the Samsung Galaxy Note 10+ will come with a specially designed case, a metal badge as a collector’s item, an S Pen, and Galaxy Buds. In addition to this, the company has also bundled the phone with Star Wars-themed content including wallpapers, shutdown animations, icons as well as sounds.

The limited edition of the phone will be available for purchase in select markets from December 10. According to the company, the device will be selling in  Australia, Denmark, Finland, France, Germany, Hong Kong, Korea, Norway, Russia, Spain, Sweden, Turkey, UAE, UK and the USA.

“The special edition device adds to the collaboration between Samsung and Lucasfilm, which includes the recently launched holiday campaign film, celebrating the theatrical release of Star Wars: The Rise of Skywalker.”

In the US market, the Galaxy Note10+ Star Wars Edition will be available in limited quantities with a price tag of $1,299.99 form December 13 onwards. The special edition smartphone can be purchased via Amazon, select Best Buy stores, select Microsoft stores, Samsung.com and the Samsung Experience Stores.

As for the specifications, Samsung Galaxy Note 10+ will come with the same specifications. The device features a 6.8-inch 498ppi 3040×1440 pixels resolution display with Dynamic AMOLED panel supported by HDR10+ and Dynamic Tone mapping.  Under the hood, there is a Samsung Exynos 9825 processor paired with 12GB of RAM with up to 512GB internal storage. It boasts a 4,300mAh battery and the phone runs on Android 9 Pie with Samsung One UI on top.

As for the camera, Samsung Galaxy Note 10+ comes with a triple rear camera set up that includes a 16MP Ultra Wide Camera, 12MP Wide-angle Camera, 12MP Telephoto Camera. While on the front there is a 10MP selfie camera.

Komila Singhhttp://www.gadgetbridge.com
Komila is one of the most spirited tech writers at Gadget Bridge. Always up for a new challenge, she is an expert at dissecting technology and getting to its core. She loves to tinker with new mobile phones, tablets and headphones.
Facebook
Twitter
WhatsApp
Linkedin
ReddIt
Email
Previous article
Realme CEO “caught” using an iPhone
Next article
Asus Zenbook 14 Review (UM431): Decent performance in a great shell