HomeMobilesSamsung Galaxy A11 specification leaked on the web, to come with a...

Samsung Galaxy A11 specification leaked on the web, to come with a 13-megapixel main camera and a 4000mAh battery

Galaxy A11 is the successor of Samsung Galaxy A10

The South Korean smartphone brand is still struggling to regain its number one position in the Indian handset market. The company is trying to beat its rival Chinese counterparts such as Xiaomi, Vivo and Oppo by launching new budget smartphones and by bringing new offers and deals for the buyers. The company is again gearing up to launch another new budget smartphone under its A series of smartphones. Samsung Galaxy A11 has been part of the rumour mills since last year. Since last November we came across lots of rumours and leaks related to the upcoming handset.

The company is preparing to launch Galaxy A11 very soon in the market. The device is the successor of Galaxy A10. We came across a couple of leaks with regard to the smartphone. In a new development, a report by online publisher 91Mobiles surfaced on the internet which claims that the phone is going to feature a  6.4-inch LCD and a punch-hole display to house a selfie camera. The online publisher collaborated with a leakster Ishan Agarwal to reveal few details about the smartphone. 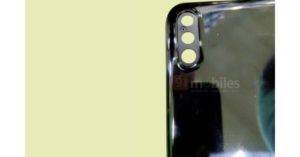 As per the report, Samsung Galaxy A11 is going to run on One UI based on Android 10. In terms of camera capabilities, the smartphone will be sporting a triple rear camera set up that will include a 13-megapixel primary camera. The information on the other two camera sensors is still unknown. However the device will be sporting an 8-megapixel selfie camera inside the punch-hole display, Galaxy A11 is expected to be housing a 4,000mAh battery.

In the past, the design details of the forthcoming smartphone were also leaked on the web. It is stated that the handset is going to have a polycarbonate body. On the rear, there will be a triple rear camera set up vertically placed on the top left corner of the phone. A rear-mounted fingerprint sensor was not visible which clearly indicated that there will be an in-display fingerprint sensor. The information related to the processor and RAM is still unknown but it is stated that the smartphone will be offered in 128GB storage variant.

As we already mentioned that Samsung Galaxy A11 is the successor of Galaxy A10 which was launched in the year 2019 the pricing of the upcoming smartphone will also be similar to its predecessor. It is expected to arrive under Rs 10,000 price segment in the Indian market.

Komila Singhhttp://www.gadgetbridge.com
Komila is a one of the most spirited tech writers at Gadget Bridge. Always up for a new challenge, she is an expert at dissecting technology and getting to its core. She loves to tinker with new mobile phones, tablets and headphones.
Facebook
Twitter
WhatsApp
Linkedin
ReddIt
Email
Previous articleInstagram rolled out direct messaging featuring on Windows 10
Next articleOppo Reno 3 Pro with 64MP rear camera all set to launch in India today: How to watch the live stream

Komila Singh - May 18, 2021 0
Flipkart has just wrapped off its Flagship Fest sale on its platform. Today it has kicked off its ‘Electronics Sale' to offer the best...