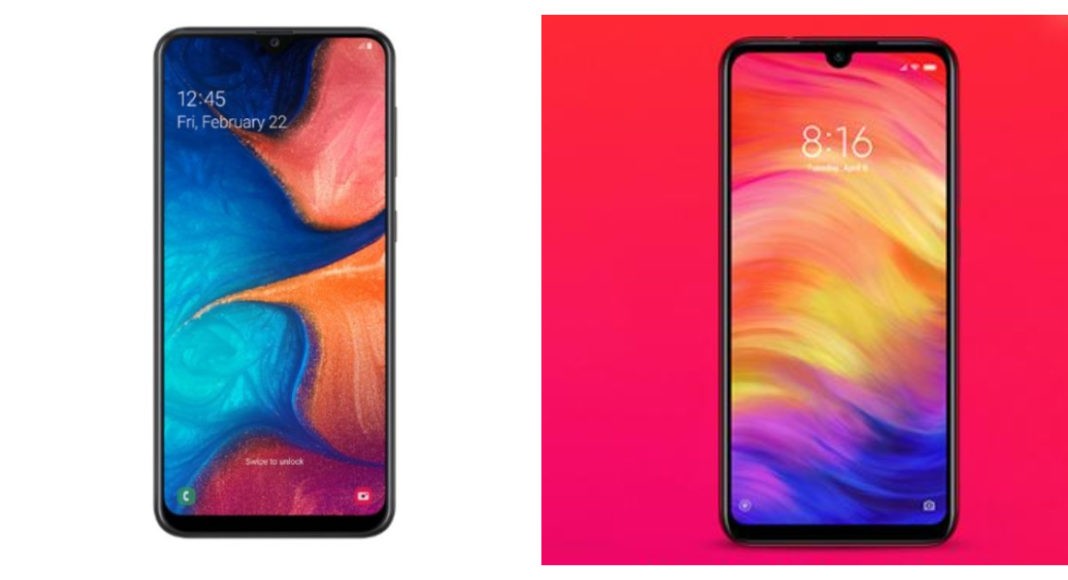 South Korean technology giant Samsung has today launched its Galaxy A20 in India at Rs 12,490. The handset comes with features like a dual rear-camera setup, a 4,000mAh battery and an Exynos processor. Samsung Galaxy A20 falls between the Galaxy A10 and the Galaxy A30 which were launched earlier in the country along with the current top-end variant of the Galaxy A-series – Galaxy A50. Although Samsung plans to dominate the budget and the mid-range smartphone segments with the release of the Galaxy A-series devices, there are many competitors in the targeted price range. Being a part of one of the most competitive price segments in the smartphone industry, the newly launched Samsung Galaxy A20 has many rivals. If we consider its price, it competes directly with Xiaomi’s Redmi Note 7 Pro smartphone that is priced at Rs 13,999. Read on to find out the specifications and the features of both the devices and how they compare with each other:

Samsung Galaxy A20: 4,000mAh battery with support of fast charging

Samsung Galaxy A20: Android 9.0 Pie skinned with Samsung’s One UI.

In terms of specifications, both the devices a number of common specifications like the battery and their Android version. But we also see that the base variant of the Redmi Note 7 Pro comes with 4GB of RAM and 64GB of storage while the Galaxy A20 comes in only one variant with 3GB RAM and 32GB storage. The camera resolution of the Redmi Note 7 Pro is better than Samsung Galaxy A20. But then, we should also remember that Xiaomi’s MIUI comes with a lot of bloatware and annoying and vulgar ads, that can hamper the user experience.

And most importantly, Samsung Galaxy A20 costs around Rs 1,500 cheaper than the base variant of Redmi Note 7 Pro. So, in the end it all comes down to what the user prefers in a smartphone. Some may want a better camera experience, while others may want to avoid ads and have a phone that is more durable.

Aman Singhhttps://www.gadgetbridge.com/
Aman Kumar Singh has a Masters in Journalism and Mass Communication. He is a journalist, a photographer, a writer, a gamer, a movie addict and has a love for reading (everything). It’s his love of reading that has brought him knowledge in various fields including technology and gadgets. Talking about which, he loves to tweak and play with gadgets, new and old. And when he finds time, if he finds time, he can be seen playing video games or taking a new gadget for a test run.
Facebook
Twitter
WhatsApp
Linkedin
ReddIt
Email
Previous articleElon Musk explains why Tesla Model 3 has a camera inside it
Next articleApple launches Beats Powerbeats Pro true wireless earbuds: Price and specifications