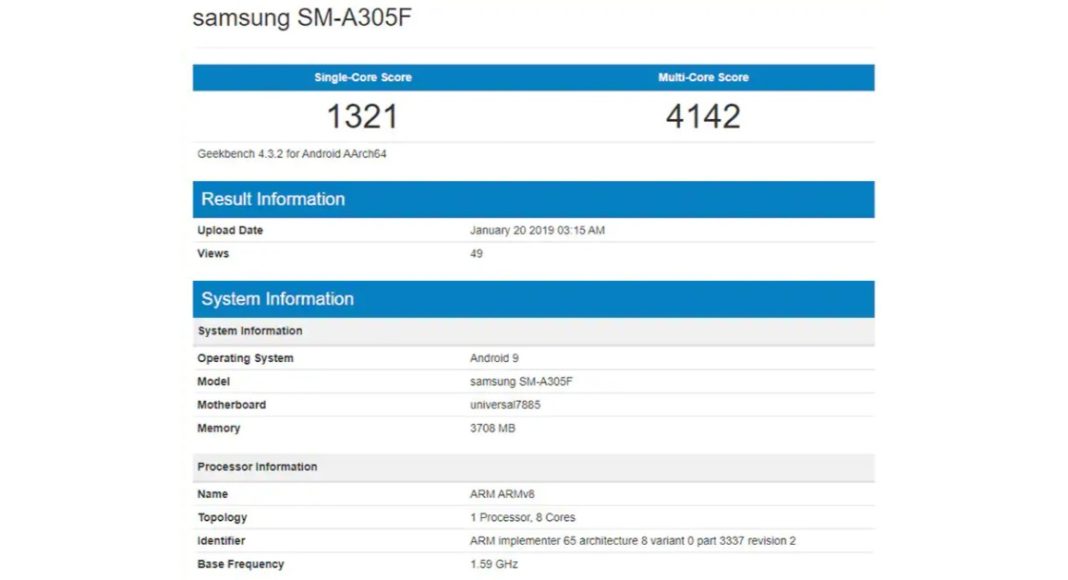 The Samsung Galaxy A30 has just been listed on Geekbench. From that, we know that the smartphone would run on Android Pie out-of-the-box. The smartphone is going to be powered by an Exynos 7885 SoC and will be coupled with 4GB RAM. In an earlier listing, it was mentioned that the Samsung Galaxy A30 will come in 32GB and 64GB storage variants. However, it is unknown as of now whether both of them will come with the 4GB RAM. This report is in sync with an earlier report that says that the Galaxy A30 will launch with nine phones in mid-range price category..

The latest Geekbench leak, that talks about the smartphone’s specifications showcased it with the model number SM-A305F. To talk about the processor, the Samsung Galaxy A30’s Enxnos 7885 SoC is the same as the Galaxy A8 and the Galaxy A8+. The Samsung Galaxy A8 measures 149.2×70.6×8.4mm and weighs 172grams.The smartphone sports a Super AMOLED capacitive 5.6-inch touchscreen with a resolution of 1,080×2,220 pixels and an aspect ratio of 18.5:9.

The Galaxy A8 runs on Android Oreo and has a 4GB RAM which comes in two storage options. These options include 32GB and 64GB internal storage. There is a dual front camera setup that includes an 8MP and a 16MP sensor. The back camera includes a single sensor of 16MP. Connectivity options include WiFi 802.11, Bluetooth 5.0, GPS, NFC, FM Radio and USB 2.0. The device packs a 3,000mAh battery that is non-removable.

The Samsung Galaxy A8+ sports a Super AMOLED 6-inch capacitive touchscreen that has a resolution of 1080×2220 pixels and an aspect ratio of 18.5:9. The 4GB RAM variant comes with 32GB internal storage, and the 6GB RAM comes with 64GB internal storage. The storage is expandable with the help of a microUSB card slot up to 256GB. Connectivity options include WiFi 802.11, Bluetooth 5.0, GPS, NFC FM Radio and USB 2.0. The Samsung Galaxy A8+ packs a non-removable battery of 3,500mAh.