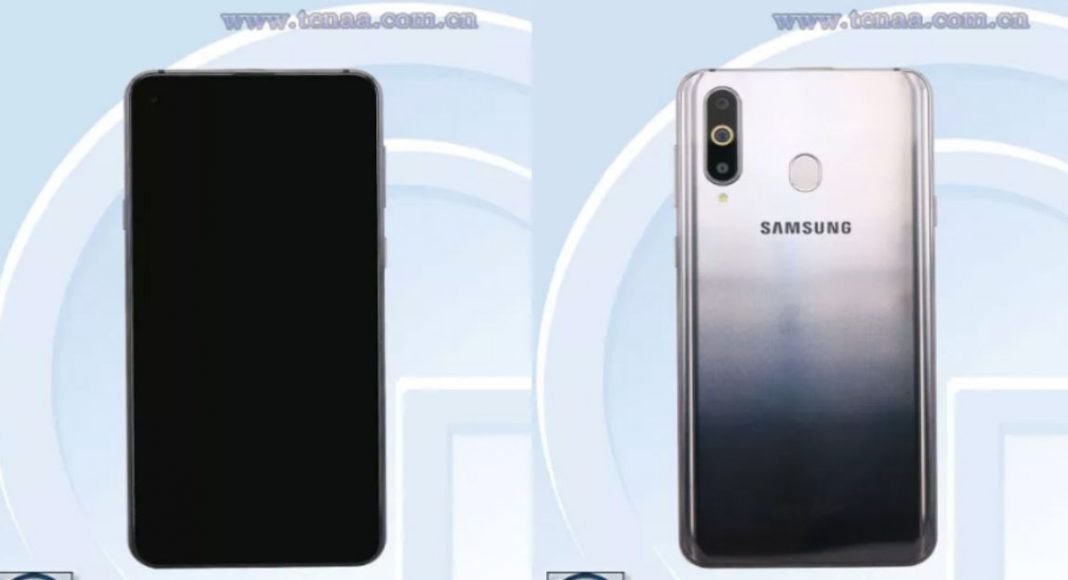 Just after getting certified by FCC, Samsung Galaxy A8s has now obtained vital certifications via TENAA. And because of this, we got a look at the upcoming Samsung smartphone before its December 10 launch.

We have to admit that the TENAA listing does not reveal much, but then, it does give us a good look at the front and back panels of the device. However, no specifications have been revealed or confirmed.

The 6.39-inch display of the device can be seen, and it is indeed the ‘Infinity-O’ screen Samsung had spoken about at its developer conference last month. So the 24MP selfie camera is housed in a hole on the top left of the display of Samsung Galaxy A8s. The back panel of the smartphone has the triple rear camera setup that comprises of 24MP main, 10MP telephoto and 5MP depth cameras.

The back panel of the smartphone has Gradient White and Blue colours and sports a fingerprint scanner.

Samsung Galaxy A8s is expected to be powered by Snapdragon 710 SoC clubbed with 6GB of RAM. The smartphone will reportedly house a 3,400mAh battery.

The smartphone will be the first ever to sport a display with a cut-out hole for the selfie camera. Samsung has come up with this in order to give its users a truly full-screen experience. It has also been speculated that Samsung Galaxy A8s will come without a headphone jack. If this report is true, then it will be the first Samsung smartphone to ditch the 3.5mm headphone jack.

Samsung Galaxy S10 is also said to sport a cut-out selfie camera. This seems in line with Samsung’s strategy because the South Korean technology giant usually introduces features in its mid-range phones and then gets them to their flagship devices.

It is worth noticing that Huawei Nova 4, which will also be launching this month on December 17, will also come with an on-screen selfie camera. It was earlier being reported that Huawei’s device will launch sooner than Samsung, and reports said that it is going to beat the company in its own game. However, Samsung managed to schedule it’s event a week before Huawei’s.

Gadget Bridge Bureauhttp://gadgetbridge.com
Facebook
Twitter
WhatsApp
Linkedin
ReddIt
Email
Previous article
Rashmi, the first humanoid robot made by a software engineer based out of Ranchi is now a RJ
Next article
What is cloud computing: Everything you need to know