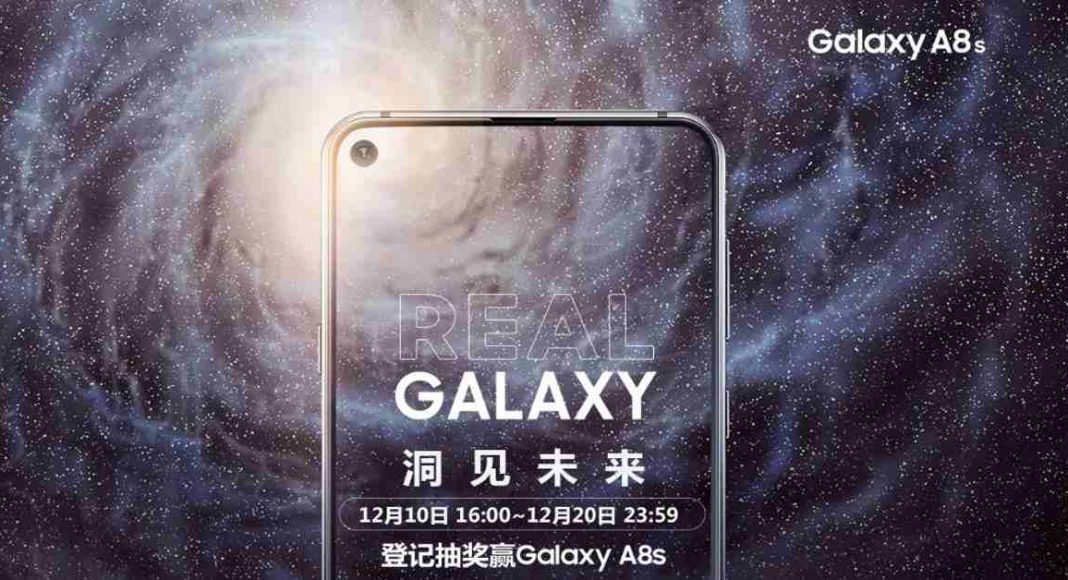 South Korean technology giant Samsung has launched its A8s smartphone China today. The smartphone is the first-ever to come with a display hole to house the selfie camera. Samsung had unveiled this type of screen at its developer conference last month and calls it the Infinity-O display. Interestingly, Samsung Galaxy A8s was launched just hours after Huawei announced its Honor V20, which comes with a similar cut-out for the front-facing snapper. Here’s a look at the pricing and specifications of Samsung Galaxy A8s smartphone:

The smartphone is available in 6GB and 8GB RAM variants, which are clubbed with 128GB of internal storage. As of now, there is no word on the pricing of Samsung‘s latest offering. However, Samsung Galaxy A8s mobile can be pre-ordered in China until December 21 and the actual shipping of the smartphone is assumed to begin after that. So we expect the official price to be revealed closer to the date of shipping. If you are an interested buyer, you will be able to pick up the smartphone in Blue, Gray and Green colours.

Coming to the specifications of Samsung Galaxy A8s, the smartphone runs Android 8.1 Oreo skinned with Samsung’s UI and features a 6.4-inch touchscreen display with 1080 x 2340-pixel resolution and an aspect ratio of 19.5:9. Samsung did not mention if the smartphone’s display is Super AMOLED, so it is being speculated that the new offering comes with an LCD IPS screen. On the top left corner of the display, there is a 6.7mm hole for the selfie shooter and the smartphone comes without any notch. As we mentioned earlier, Samsung calls this type of screen as Infinity-O display and it has previously said earlier that it has come up with it to give its users a full-screen experience.

For imaging duties, there is a triple rear camera setup on Samsung Galaxy A8s with a 24MP primary sensor (with f/1.7 aperture), a 10MP telephoto sensor (with f/2.4 aperture) and a 5MP depth sensing sensor (f/2.2 aperture). The selfie camera of the smartphone has a 24MP sensor with an f/2.0 aperture.  The back panel of Samsung Galaxy A8s houses a fingerprint scanner and the smartphone comes with a 3,400mAh battery with adaptive fast charging support.

Avani Baggahttp://www.gadgetbridge.com
Avani has an immense love for reading, travelling and food, but not necessarily in the same order. Avani almost started pursuing law, but life had other (better) plans for her and she chose to be a writer instead (luckily!) She previously covered technology at Times Internet and wrote about smartphones, mobile apps and tech startups. When she’s not writing, you’ll be able to find her in book stores or catching up on her social life.
Facebook
Twitter
WhatsApp
Linkedin
ReddIt
Email
Previous articleToreto Magik wireless charger launched in India at Rs 1,999
Next articleHonor View 20 to launch in January with a 48MP rear camera and an in-display front camera