The device is said to debut around the Rs 15,000 price segment in the country 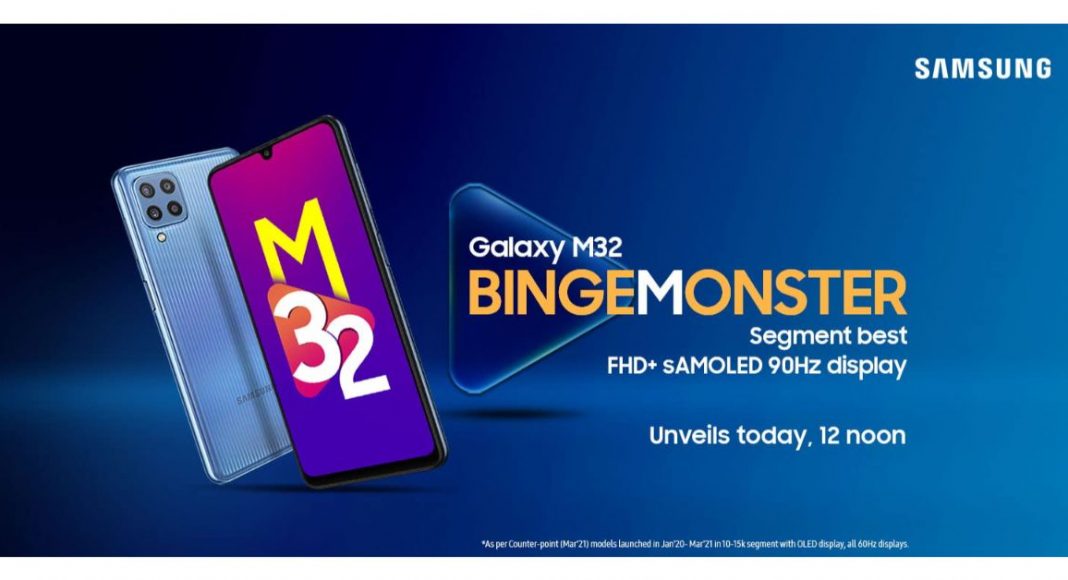 The South Korean giant Samsung is going to introduce a new smartphone in its affordable M-Series in India today. The company has scheduled to launch Samsung Galaxy M32 at 12 noon in the country. The key highlights of the handset are said to include a 90Hz Super AMOLED display and a 6,000mAh battery that is claimed to last for a whole day on a single charge.

Before its launch in the country, Samsung has already listed the device on Amazon by creating a dedicated microsite to tease its availability. The company has not yet revealed much about the device but as per the listing, there will be a quad rear camera set up on its back that will include a 64-megapixel primary sensor. Additionally, there will be a 20-megapixel selfie camera sensor on the front. It will also come with a 6,000mAh battery. There will be a 6.4-inch full-HD+ Super AMOLED display with a 90Hz refresh rate and 800 nits of peak brightness.

The key specs of the Samsung Galaxy M32 have been leaked via Google Console listing that appears to be authentic when compared with the recently surfaced specs on the Samsung site.

The device is said to feature a full-HD+ display with 1,080×2,009 pixels of resolution. It will run on Samsung OneUI based on top of Android 11 and powered by an octa-core MediaTek MT6769T SoC (MediaTek Helio G80) with 6GB of RAM.

As per the DEKRA certification website, Galaxy M32 will be equipped with a quad rear camera setup that will also include a 64-megapixel primary camera with f/1.8 aperture, an 8-megapixel ultra-wide-angle lens with 123-degrees of FoV, a 5-megapixel macro sensor and a 2-megapixel depth sensor. For taking selfies, there is a 20-megapixel front-facing camera. In addition to this, it will ship a  15W fast charger.

The company has not yet revealed the price but hinted that Samsung Galaxy M32 will debut in India under Rs 15,000 price segment. The device is rumoured to arrive in two variants of 4GB RAM with 64GB storage and 6GB RAM with 128GB storage options. It is likely to be offered in two colour options of Black and Blue.

Komila Singhhttp://www.gadgetbridge.com
Komila is one of the most spirited tech writers at Gadget Bridge. Always up for a new challenge, she is an expert at dissecting technology and getting to its core. She loves to tinker with new mobile phones, tablets and headphones.
Facebook
Twitter
WhatsApp
Linkedin
ReddIt
Email
Previous article
June 21 Flipkart Daily Trivia Quiz Answers: Answer to win exciting prizes
Next article
Mi 11 Lite to be available in three pastel shades, Xiaomi teases the colour options ahead of the India launch