The device will launch via the Amazon India website 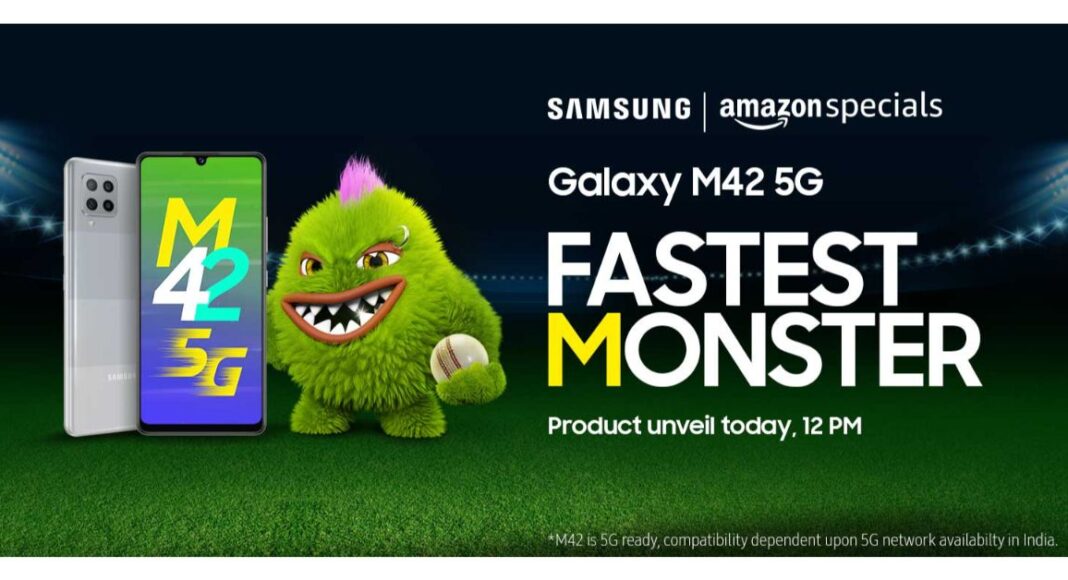 Samsung is all set to launch its next 5G smartphone in India today. The company is going to introduce the long-rumoured Samsung Galaxy M42 5G in the country. It should be noted that this smartphone is going to be the first 5G smartphone to make its entry into the popular Galaxy M range. It will be featuring a waterdrop-style notch display and a quad-camera setup in a square-shaped module.

The Samsung Galaxy M42 5G shall be unveiled through the Amazon India website at noon today. Ahead of the official announcement, the device has also been listed on Amazon and a dedicated landing page has been created to tease its availability. The company has not yet disclosed the pricing of its 5G phone but leaks suggest that it will be retailing in India at Rs 20,000 and Rs 25,000 price segments. After getting launched the smartphone will be available for purchase via Amazon India, Samsung online store and partner retail outlets.

Coming to the specifications, a recent report suggests that Samsung Galaxy M42 5G will be a rebranded variant of Galaxy A42 5G. The device code “a42xq” spotted via Google Play Console listings claims that they both have the same codes. Most importantly the specifications of both the handsets are also the same. On the other hand, Wi-Fi Alliance and Bluetooth SIG listing had also confirmed that Galaxy M42 5G, is a rebranded Samsung Galaxy A42 5G model.

If the report is to be believed then the specifications of the smartphone will be similar to Galaxy A42 5G, however, there might be some slight differences. As per the listing the Samsung Galaxy M42 5G will be powered by Qualcomm SM7225 chipset, which is the Snapdragon 750G processor paired with 6GB of RAM. Moreover, the device will be featuring an HD+ display with 720×1,339 pixels of resolution and will ship Android 11 out of the box.

In terms of rear optics, the upcoming smartphone will include a quad rear camera set up that will include a 64 or 48-megapixel primary sensor. Moreover, it will pack a 6,000mAh battery. Alongside, the phone will also include Samsung Knox security as well as Samsung Pay. Noticeably the tech firm is promoting Galaxy M42 5G as “Fastest Monster”.

Komila Singhhttp://www.gadgetbridge.com
Komila is one of the most spirited tech writers at Gadget Bridge. Always up for a new challenge, she is an expert at dissecting technology and getting to its core. She loves to tinker with new mobile phones, tablets and headphones.
Facebook
Twitter
WhatsApp
Linkedin
ReddIt
Email
Previous article
April 28 Flipkart Daily Trivia Quiz Answers: Answer to win exciting prizes
Next article
How can you change Siri’s voice on iOS 14.5 and on macOS Big Sur 11.3?