Samsung Galaxy M42 5G confirmed to launch in India on April 28, gets listed on Amazon.com

This is the first M series phone to support 5G connectivity 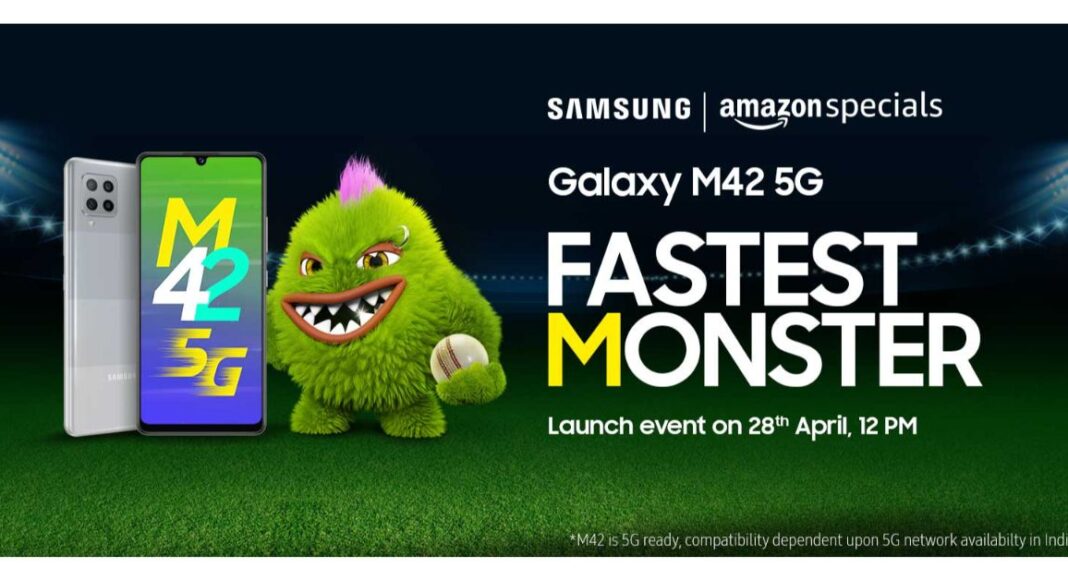 Today the South Korean giant has officially launched the Samsung Galaxy M42 5G in India. Till now there was no confirmation from the company if the device even existed however lots of rumours and fresh leaks have been doing the rounds on the web with regards to the smartphone’s pricing and key specs. Recently, the pricing of the much anticipated Samsung Galaxy M42 5G was also tipped in addition to the leak of video teasers. It should be noted that this smartphone is going to be the first 5G smartphone to make its entry into the popular Galaxy M range. Read all the details here.

Samsung has confirmed the arrival of the Samsung Galaxy M42 5G in India by listing it on Amazon.com. Through the listing, the company has confirmed its launch day along with some key details. As per the Amazon listing, the device is scheduled to launch in India on April 28. In addition to this the Notify Me button has gone live and e-commerce has also started taking the registration of the 5G smartphone.

Alongside revealing the launch date of the Samsung Galaxy M42 5G for India the company has also revealed few key details of the upcoming mobile phone. As per the e-commerce site listing, M42 will be featuring a waterdrop-style notch display. While on the back of the phone it will sport quad cameras stacked inside a square-shaped module.

Moreover, the multicoloured striped finish on the rear panel adds freshness to the design aesthetics of the Samsung Galaxy M42 5G. Most importantly the 5G smartphone will be powered by the Qualcomm Snapdragon 750G SoC. Alongside, the phone will also include Samsung Knox security as well as Samsung Pay. Noticeably the tech firm is promoting Galaxy M42 5G as “Fastest Monster”. In the past, the company has advertised most of its devices bearing a massive capacity battery as Monster smartphone. As of now, the company has now revealed the capacity of the battery but previous video teasers, which were leaked online suggest the phone will pack a 6,000mAh battery. Moreover, it might also run Android 11 OS and features a 64-megapixel main rear camera.

Some reports also claim that the Samsung Galaxy M42 5G is likely to be a rebranded variant of Galaxy A42 5G, which debuted last year. Also many times the phone appeared on various certification websites such as NFC, Wi-Fi Alliance, and BIS.

Komila Singhhttp://www.gadgetbridge.com
Komila is one of the most spirited tech writers at Gadget Bridge. Always up for a new challenge, she is an expert at dissecting technology and getting to its core. She loves to tinker with new mobile phones, tablets and headphones.
Facebook
Twitter
WhatsApp
Linkedin
ReddIt
Email
Previous article
Sonu Sood promoting Good Worker app for migrant job seekers amidst the COVID-19: What is this app all about?
Next article
Oppo A74 5G smartphone to launch in India on April 20, to be available via Amazon