The device is expected to pack a 7,000mAh battery 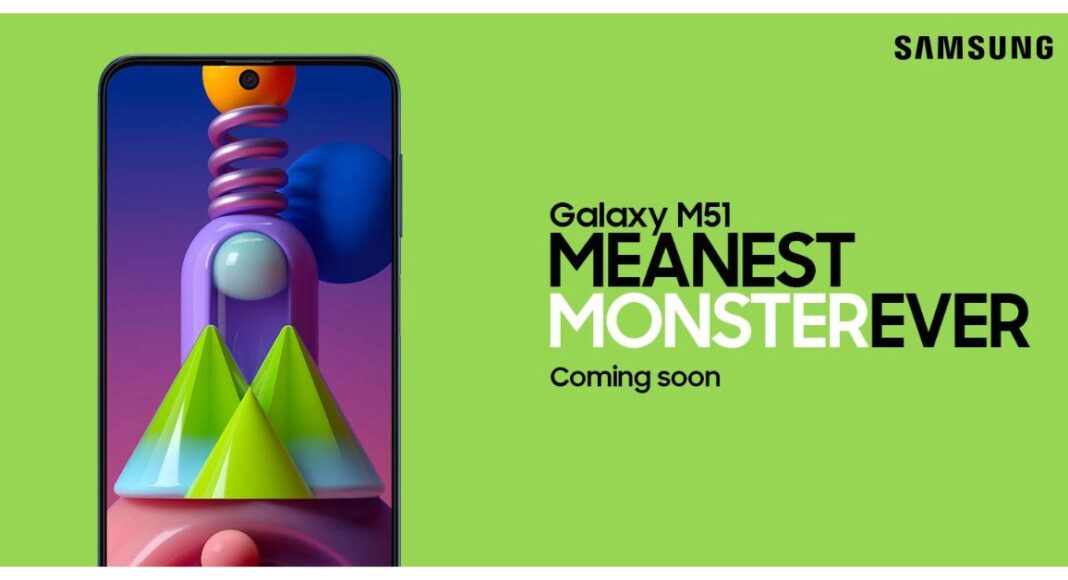 Soon the South Korean smartphone company Samsung will be launching a new smartphone in the Indian market. The company recently teased Samsung Galaxy M51 launch in India via the e-commerce website Amazon. For this, a dedicated microsite has also been created on the portal. The device is speculated to arrive in the second week of September with a bigger battery while some renders suggesting quad cameras and a hole-punch design display to include a selfie camera. Apart from that, the smartphone’s specifications have been tipped via Google Play Console suggesting octa-core Qualcomm Snapdragon 730 SoC.

Samsung Galaxy M51 is soon coming to India and is being teased via Amazon. The online shopping website is also hosting a quiz on the microsite created to tease the smartphone. Those answering the question correctly would win Galaxy M51. In addition to this, the poster image hints at a hole-punch design display. Additionally, a video teaser has also been released via the company’s official Twitter handle giving us just a glimpse of the upcoming smartphone. The teaser revealed the smartphone to have a quad-camera set up on the back of the phone with an LED flash. As it does not have a rear-mounted fingerprint sensor so it might include a side-mounted or an in-display fingerprint sensor. Moreover, there would be a Qualcomm Snapdragon processor alongside a Super AMOLED Plus Infinity-O Display.

If you can guess why the all-new #SamsungM51 is the most unpredictable, power-packed #MeanestMonsterEver, you can stand a chance to win one for yourself. A mean reward for one mean monster lover out there. pic.twitter.com/o2YAzwJL6U

Apart from the official teasers, the device has now been spotted on a Google Play Console listing. It is slated to have an octa-core Qualcomm Snapdragon 730 chipset paired with Adreno 618 GPU. The alleged smartphone is said to come in an 8GB of RAM option. As per the listing Galaxy, M51 will be featuring a display with a resolution of 1080 x 2400 pixels though it did not reveal the dimensions of the handset.

On the contrary, a tipster Sudhanshu has tipped that the phone will be powered by Snapdragon 730G SoC for the improved gaming experience. While another tipster has revealed that it should have a 6.67-inch full-HD+ AMOLED display along with Snapdragon 730 SoC contradicting Sudhanshu’s claim.

While the previous rumours suggest that Galaxy M51 will be coming with 25W fast charging tech supporting the 7,000mAh battery. According to a report the device will be carrying a quad rear camera set up that will include a 64-megapixel sensor, 12-megapixel wide-angle lens, a 5-megapixel depth and a macro sensor.

The pricing is yet to be revealed but as per a report, Galaxy M51 price should fall between Rs 25,000 and Rs 30,000. The company has not yet revealed the exact date for the release of the smartphone but it should launch starting next month or maybe the second week of September. We will update the release date as soon as it is officially confirmed by the company so stay tuned to Gadget Bridge.

Komila Singhhttp://www.gadgetbridge.com
Komila is one of the most spirited tech writers at Gadget Bridge. Always up for a new challenge, she is an expert at dissecting technology and getting to its core. She loves to tinker with new mobile phones, tablets and headphones.
Facebook
Twitter
WhatsApp
Linkedin
ReddIt
Email
Previous article
Realme 7 series with 65W SuperDart fast charging to launch in India on September 3
Next article
Google Duo soon introducing a Beta on Android TV