If you have been counting days to get your hands on Samsung’s flagship Galaxy Note 9, your wait is finally over. The phone is getting launched in India two days prior to its global availability – which will begin on August 24. The key highlights of the smartphone include a bigger display and the upgraded S Pen that comes with Bluetooth support. The smartphone is also the first from Samsung to come with a 4,000mAh battery.

Samsung Galaxy Note 9 features a 6.4-inch Super AMOLED Infinity display with Quad HD+ resolution. The screen of the smartphone has an aspect ratio of 18.5:9. While in a number of global markets, Samsung Galaxy Note 9 will be powered by Qualcomm Snapdragon 845 SoC, in India, it will be powered by Exynos 9810 processor. There are two storage variants of the device — 6GB RAM/128GB storage and 8GB RAM/512GB of storage. It can also hold a microSD of up to 512GB in case users want more storage.

Samsung Galaxy Note 9 houses a 4,000mAh battery and sports a dual rear camera setup with a 12MP wide angle autofocus sensor and a 12MP telephoto autofocus sensor. Both the sensors support optical image stabilization. There is also an 8MP autofocus sensor on the front panel that can be used for taking selfies and making video calls on this mobile. 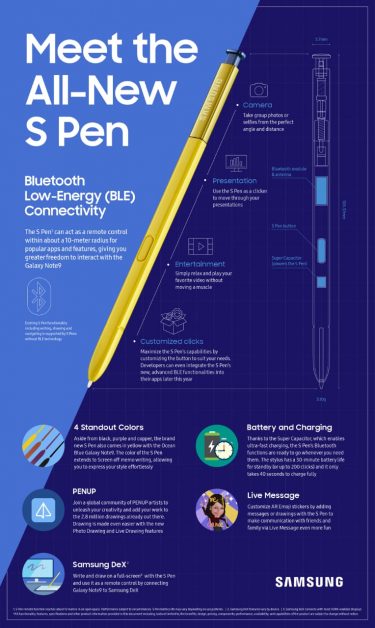 The Android 8.1 Oreo based smartphone sports an upgraded S Pen that supports Bluetooth Low Energy module. The new S Pen can be used as a remote control for presentations and can manage various apps like YouTube. It can also be used to switch between primary and secondary cameras and for clicking selfies. Furthermore, the S Pen starts getting charged automatically just by placing it inside the smartphone. It is claimed that with just 40 seconds of charging, S Pen can function for 30 minutes.

Samsung Galaxy Note 9 comes with Dex. With Dex on-board, users can get a desktop-like experience from their phone.

The 6GB RAM/128GB inbuilt storage version costs Rs 67,900 and the 8GB RAM/512GB variant is priced at Rs 84,900. The pre-booking of the device started on August 10, but now it has been closed. The smartphone will be available at Samsung Mobile Store, Amazon India website, Flipkart and Airtel online store. It will also be available on Samsung Shop and various offline retail stores.

Avani Baggahttp://www.gadgetbridge.com
Avani has an immense love for reading, travelling and food, but not necessarily in the same order. Avani almost started pursuing law, but life had other (better) plans for her and she chose to be a writer instead (luckily!) She previously covered technology at Times Internet and wrote about smartphones, mobile apps and tech startups. When she’s not writing, you’ll be able to find her in book stores or catching up on her social life.
Facebook
Twitter
WhatsApp
Linkedin
ReddIt
Email
Previous article
Nokia 6.1 Plus launched in India: Price, specifications and more
Next article
7 things you can do with your Samsung Galaxy Note 9’s S Pen