As the launch of Samsung Galaxy S10, Galaxy S10 Lite and Galaxy S10+ draws closer, more and more reports and rumours about the smartphones are surfacing online. The latest one comes from XDA Developers that claims to confirm the presence of an in-display fingerprint scanner on at least one among the three devices.

Reports about Samsung adding an on-screen fingerprint scanner on its smartphone have been circulating online since Galaxy S8’s launch. Speaking about previous reports about Samsung Galaxy S10 smartphones, it has been said that the with the devices, South Korean technology giant will be ditching the iris scanner and will instead opt for an in-display fingerprint sensor. It was also reported that 30% of Samsung Galaxy S10’s screen will act as the fingerprint scanner rather than just one point on the entire screen having the sensor embedded on it.

In 2018, a number of smartphone makers like Oppo, OnePlus, Xiaomi, and Lenovo adopted this trend, the first one among them being Vivo. All signs point towards Samsung getting this feature on its next flagship device.

And now, we finally have a ‘confirmation’ for this by XDA Developers. The website has share two screenshots that are claimed to be from the Samsung app – one from SimpleAuthBottomView class and the second from the OnlinePayMainBaseFragment class. In both the screenshots that the technology website has shared, the app seems to be checking if the smartphone has an in-display fingerprint scanner, and if it does, the app would then “shift the payment flow window at the bottom a bit higher up to make more room.” According to XDA, one among the screenshots also have Samsung Galaxy S10’s codename – Beyond – on it. 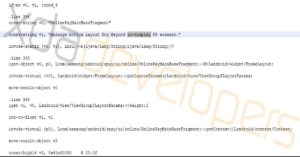 However, we should mention that all the variants of Samsung Galaxy S10 have the same code-name, so with just these screenshots, it cannot be determined if all the models will come with an in-display fingerprint scanner or only one or two of the devices will sport the feature. 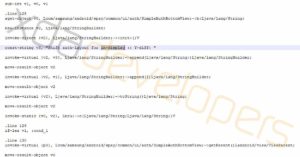 Avani Baggahttp://www.gadgetbridge.com
Avani has an immense love for reading, travelling and food, but not necessarily in the same order. Avani almost started pursuing law, but life had other (better) plans for her and she chose to be a writer instead (luckily!) She previously covered technology at Times Internet and wrote about smartphones, mobile apps and tech startups. When she’s not writing, you’ll be able to find her in book stores or catching up on her social life.
Facebook
Twitter
WhatsApp
Linkedin
ReddIt
Email
Previous articleHow to track your lost or stolen iPhone
Next articleLG V40 ThinQ with five cameras goes on sale in India