After months of rumours and reports, South Korean technology giant Samsung has finally launched its flagship smartphones – Galaxy S10, Galaxy S10+ and Galaxy S10e. The devices pack very powerful specifications and Samsung has added some very impressive features like Infinity-O display and ultrasonic on-screen fingerprint scanner in order to make its tenth-anniversary edition stand out among the premium devices.

Just a day after being launched in San Francisco, Samsung Galaxy S10, Galaxy S10+ and Galaxy S10e smartphones have got listed on Amazon India’s website. The three smartphones are now available for pre-orders, and the e-commerce giant has also listed their pricing details in India.

To begin with, the base variant of vanilla Samsung Galaxy S10 – which comes with 8GB RAM and 128GB storage – has been listed at Rs 71,000. While the high-end variant – that has 8GB of RAM and 512GB of storage – can be bought that Rs 92,000. However, currently a discount can be availed on the two models and they can be bought for Rs 66,900 and Rs 84,900 respectively.  Although the website does not mention this, the discount may only last until the pre-order period.

The most affordable of the three smartphones is the Samsung Galaxy S10e. Only the 6GB RAM and 128GB storage variant of the smartphone has been listed on Amazon India and it has been priced at Rs 59,000. However, currently, it can be bought at Rs 55,900 via the e-commerce website. 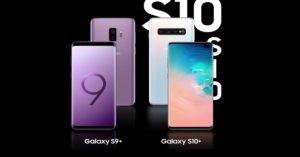 We should also mention that a cashback of up to Rs 6,000 is also available on purchases that will be made via HDFC Bank credit and debit cards. Those who will pre-order the smartphone will be able to buy the Galaxy Watch Active and Galaxy Buds at discounted prices of Rs 9,999 and Rs 2,999 respectively.

Avani Baggahttp://www.gadgetbridge.com
Avani has an immense love for reading, travelling and food, but not necessarily in the same order. Avani almost started pursuing law, but life had other (better) plans for her and she chose to be a writer instead (luckily!) She previously covered technology at Times Internet and wrote about smartphones, mobile apps and tech startups. When she’s not writing, you’ll be able to find her in book stores or catching up on her social life.
Facebook
Twitter
WhatsApp
Linkedin
ReddIt
Email
Previous articleGoogle I/O 2019 tickets go live, will be available till February 28
Next articleXiaomi Redmi Note 5 Pro, Redmi Note 6 Pro and Redmi Y2 to undergo Android Pie based MIUI 10 Global beta testing