The first flagship launch by the Korean company (Samsung) is going to be held on 11th of Feb 2020. Yes, we are talking about the Samsung Unpacked event that is going to take place in Feb and will bring to life the next in its S series. Samsung is naming the next Galaxy S-series smartphone as S20 and S20+, not S11 or S11+. Since it is 2020 the series has skipped a decade. Also at the event, rumours are, Samsung will showcase its first clamshell-type foldable screen phone.

As the event comes near, it was evident that some leaks of the smartphone and its specs will come to life. Some images have been procured by XDAdevelopers of the Samsung Galaxy S20+, which show the smartphones form factor. Looking at these images one can see an array of 5 cameras on the glass back in rectangular placement with curved edges. The array also includes an LED flash. The inclusion of 5 cameras means that the Samsung Galaxy S20+ will have an ultra-wide camera, a telephoto lens and most probably a macro lens too.

The front of the smartphone houses an edge to edge display with a tiny cut-out punch hole camera on the Samsung Galaxy S20+. The chin area is minimal and so are the side bezels. The front does resemble Samsung S10+, however, the back has its own identity. In the image, we can also see that Samsung will be putting a screen protector on the smartphone as well. 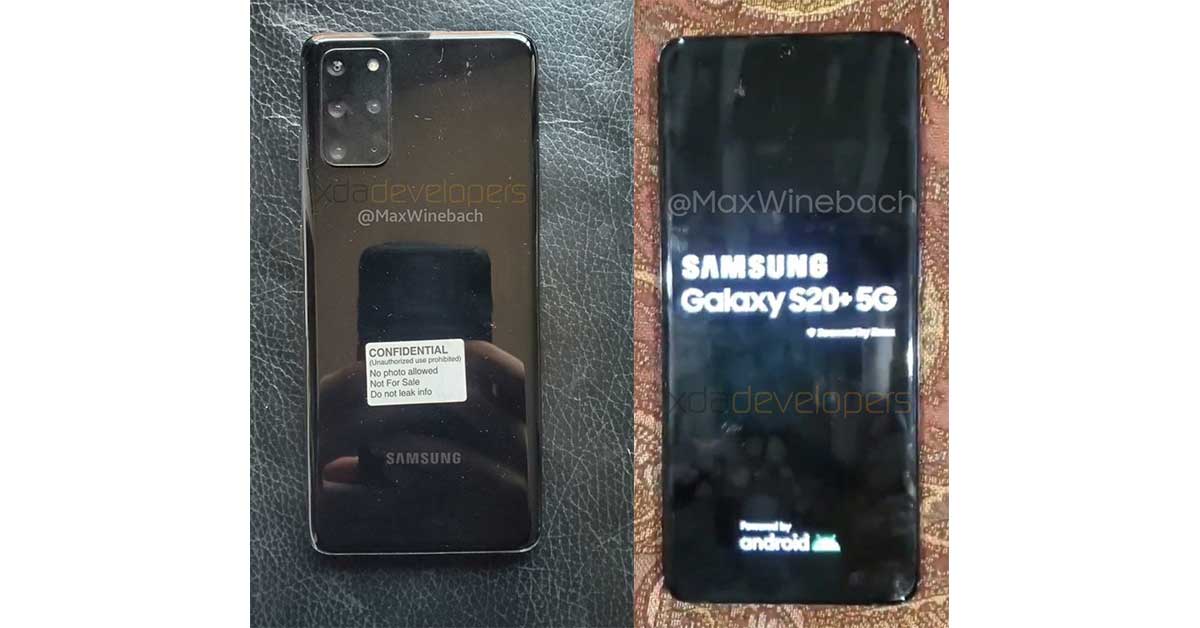 One can also see the power button and a volume rocker key on the right side of the smartphone, while the left side has no buttons. Availability of a 3.5mm audio port is also unclear. It might be there since the last edition also had it, but going by the Note 10 series by Samsung, it might not be there. Also, there might not be a dedicated Bixby button on this device.

Rumour mill also suggests that Samsung Galaxy S20+ mobile will be built on Qualcomm Snapdragon 865 chipset and will come with up to 12GB RAM. Storage can be up to 512GB and microSD card would be supported. It will be a dual SIM phone. In India like last time the Exynos series chipset driven Samsung Galaxy S20+ could be launched. It can come with Exynos 990 SoC for Indian consumers. The battery will be over 4,100 mAh and Wi-Fi 6 would be supported on this device. Well, these are still in the baking stages, but in about a months’ time, all will be clear tech-spec and otherwise.

Gadget Bridge Bureauhttp://gadgetbridge.com
Facebook
Twitter
WhatsApp
Linkedin
ReddIt
Email
Previous article
Airtel Wi-Fi calling is now live: How to use it and is your smartphone on the list?
Next article
OnePlus 8 Pro in rendered images: Will come with a 120Hz display, launch date and probable tech specs