Both the tablets will be available for purchase from June 23 onwards. 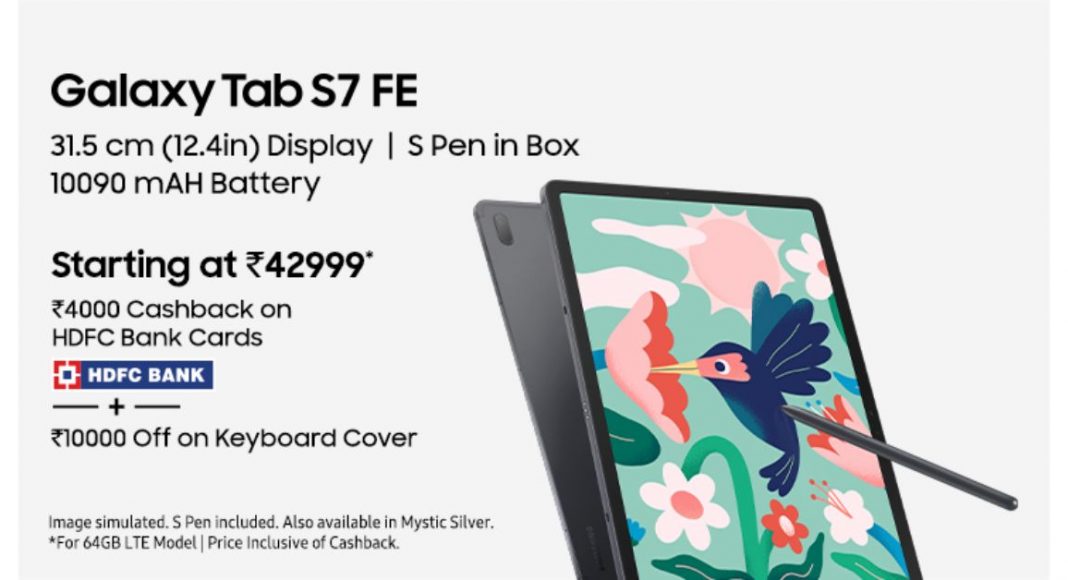 Samsung Galaxy Tab S7 FE has been launched in India with a price tag of Rs 46,999 for the 4GB RAM with 64GB storage whereas the 6GB RAM with 128GB storage variant at Rs 50,999. The Tab will be offered in four colour options of Mystic Black, Mystic Green, Mystic Pink, and Mystic Silver.

On the other hand, the Galaxy Tab A7 has been introduced in two variants: LTE and Wi-Fi. Both the variants will be available in 3GB RAM with 32GB storage priced at Rs 14,999 and Rs 11,999 respectively.

Both the tablets are scheduled to go on sale in India on June 23 via Samsung.com, Samsung Exclusive Stores and leading online and offline retail partners. The launch offers include Rs 4000 cashback on HDFC Debit Card and Credit Card transactions and Rs 10000 off on the Keyboard Cover. Not only this, on Galaxy Tab A7 Lite, you can get up to 6 months of no-cost EMI which means that you can now own Galaxy Tab A7 Lite starting at Rs 2499/- per month.

Samsung Galaxy Tab S7 FE features a 12.4-inch WQXGA TFT display with 2,560×1,600 pixels of resolution. The device runs on Samsung One UI based on top of Android 11 and is powered by Qualcomm Snapdragon 750G SoC with up to 6GB of RAM and 128GB of storage options. The storage can be expanded up to 1TB via a microSD card.

The tablets come with an 8-megapixel main rear sensor that supports 1080p video recording at 30fps. On the front, there is a 5-megapixel camera sensor for taking selfies.

In terms of connectivity, there is Bluetooth v5, USB Type-C port, Gigabit Wi-Fi GPS, and a USB Type-C 3.2 Gen1 port. There is an accelerometer, compass, gyroscope, ambient light sensor, and hall sensor. Moreover, it packs a 10,090mAh battery with 45W fast charging support. 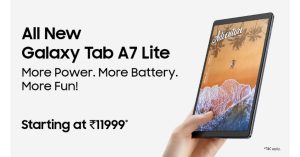 Samsung Galaxy Tab A7 Lite is highlighted with an 8.7-inch WXGA display having 1,340×800 pixels of resolution. Under the hood, there is an octa-core SoC paired with 3GB of RAM and 32GB of storage. The internal storage can be expanded up to 1TB using a microSD card. The tablet features a 5-megapixel camera sensor for taking selfies on the front.

On the connectivity front, there is Wi-Fi 802.11ac, Bluetooth v5, GPS, USB Type-C, and a 3.5mm audio jack. Sensors on the Tab include an accelerometer, compass, and ambient light sensor. The device is backed by a 5,100mAh battery that supports 15W fast charging.

Komila Singhhttp://www.gadgetbridge.com
Komila is one of the most spirited tech writers at Gadget Bridge. Always up for a new challenge, she is an expert at dissecting technology and getting to its core. She loves to tinker with new mobile phones, tablets and headphones.
Facebook
Twitter
WhatsApp
Linkedin
ReddIt
Email
Previous articleHow to change the default search engine in Google Chrome?
Next articleHow to compress PDF files for free?