The Galaxy Watch will be unveiled on August 5

As we all know that Samsung will launch the new Galaxy watch Active 2 in the market this month. Prior to its launch, we are getting more and more rumours about Galaxy Watch. In new developments, high-resolution renders of the upcoming smartwatch by Samsung has surfaced online. The high-resolution renders of the Samsung Galaxy Watch Active 2 give us a fair idea about its design as well as its style and colour options. The smartwatch is the successor of Galaxy Watch Active. Last month according to a rumour the said watch will come with an electrocardiogram feature. Additionally, it was also stated that the Galaxy Watch Active 2 will be available in three models including an LTE version.

A famous tipster Evan Blass has shared the renders giving us a fair idea how the Galaxy watch Active 2 will look like. According to the new renders, the smartwatch will be available in three case colours of each size. In addition to this, the smaller size of Active 2 (40mm) has been showcased with leather straps whereas the 44mm one will come up with smooth silicone straps. 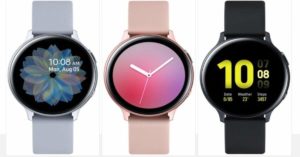 As we mentioned earlier the Samsung Galaxy Watch Active 2 will be launched in three variants.  The three variants include an LTE model, a Bluetooth-only model, and an Under Armour-branded Bluetooth version. It was specified that the Under-Armour variant of the watch will be featuring a trendy sporty strap. The Galaxy Watch Active 2 will be available with six months of free service of MapMyRun included.

In addition to this, the Samsung Galaxy Watch Active 2 is also rumoured to be integrated with an electrocardiogram (ECG) monitor. During the launch of the Galaxy Watch, the company will be revealing a few heart-related features in the smartwatch, too. These features will alert the user if their heart rate jumps too high or drops too low. All the three versions will be compatible with both Android and iPhone. But, only Android smartphones will support the LTE feature. However, it is not confirmed if the iOS devices will support the LTE feature. It is rumoured that the company is planning to bring the LTE feature for iOS devices too. The smartwatch will come up with other health-related features such as sleep tracking, Samsung Health integration and on-device coaching.

The Samsung Galaxy Watch Active 2 will be unveiled digitally on August 5 without a dedicated event. Here we would like to mention that these are just rumours and we suggest you take it with a pinch of salt.

Komila Singhhttp://www.gadgetbridge.com
Komila is a one of the most spirited tech writers at Gadget Bridge. Always up for a new challenge, she is an expert at dissecting technology and getting to its core. She loves to tinker with new mobile phones, tablets and headphones.
Facebook
Twitter
WhatsApp
Linkedin
ReddIt
Email
Previous articleAmazon now let’s users control Alexa recordings
Next articleInfinix launched the new version of the S4 smartphone with 4GB RAM and 64GB ROM in India

How to reset your Fitbit to factory settings?

Komila Singh - Apr 20, 2021 0
The e-commerce website Flipkart is hosting Daily Trivia Quiz. Every day it brings a bunch of new questions for its users. By answering them...

Google rolled out the Chrome version 90 update: UI Enhancements and...

Anurag Sharma - Apr 15, 2021 0
Google has released its latest Chrome version 90 with interesting features that will not only enhance the user experience but also the security. Users...