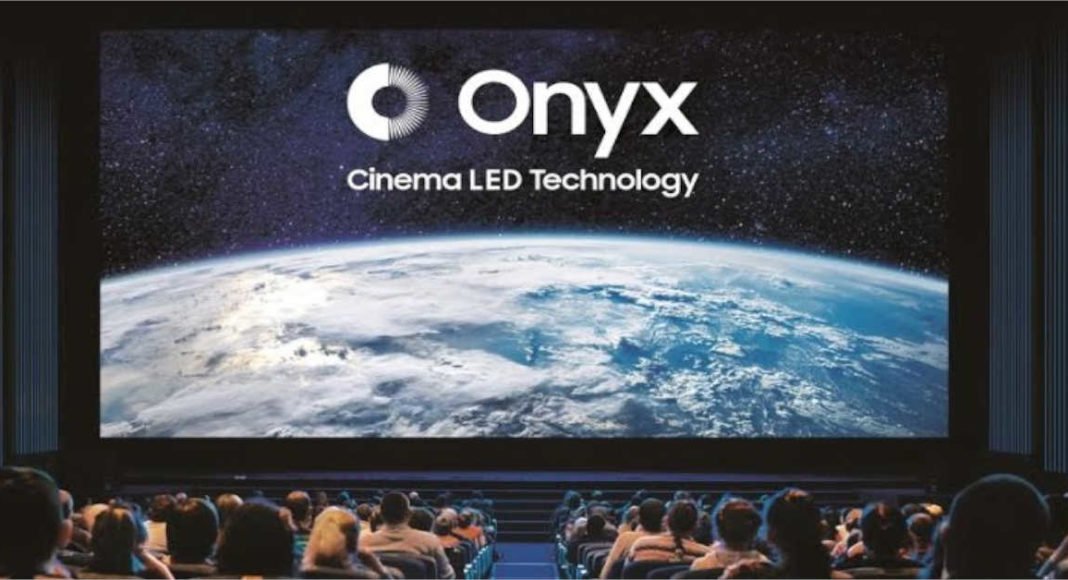 South Korean technology giant Samsung along with HARMAN has launched the world’s largest Onyx Cinema LED Screen in India today. The screen will be used in Bengaluru’s Swagath Cinemas, which is all set to be renamed to Swagath Onyx Theatre. Samsung‘s screen at Swagath Cinemas was inaugurated by Academy Award winner and musician AR Rahman.

With a 14 metre screen, Swgath Onyx Theatre in Bengaluru’s MG Road now has the largest Onyx Cinema LED screen format in the world. Besides the screen at Bengaluru, Samsung has only installed two other 14 metre screens in the world – in Malasia and China.

It is also worth mentioning that the newly launched Onyx screen is 3D applicable with active 3D technology for all 618 seats in the theatre.

With this technology, the South Korean technology giant eyes to transform the cinema viewing experience with HDR support.

At the inauguration, Puneet Sethi, Vice President, Consumer Electronics Enterprise Business, Samsung India said, “Samsung is the only brand offering an end-to-end movie experience, from stunning visuals through Onyx Cinema LED Screens to phenomenal sound from JBL Professional by HARMAN. Onyx Cinema LED at Swagath Onyx Theatre in Bengaluru will revolutionize cinema viewing experience for film lovers in the city and across India. This is a remarkable milestone for Indian cinema and a testament to our consumer-centric approach.”

“The current wave of cinema is replete with great visuals, rich soundtracks and background score. The new Onyx Cinema LED powered by JBL’s iconic sound will transform cinematic experience for movie goers. This mighty combination of a revolutionary screen and legendary sound will truly elevate the content and we are excited for Indian cinephiles to experience this epic offering,” said Prashant Govindan, Head – Professional Solutions, HARMAN India & SAARC.

Award-winning musician and composer, AR Rahman said “With Samsung’s ground-breaking Onyx Cinema LED Screen technology and HARMAN’s iconic JBL audio, moviegoers in Bengaluru will immensely enjoy their experience at the theatre. I have worked with HARMAN and used JBL Professional systems for many years, and I can confidently say that they truly do justice to the music I create. There is no sound like JBL sound, so it makes sense that the brand is powering this amazing new way to enjoy movies and music.”