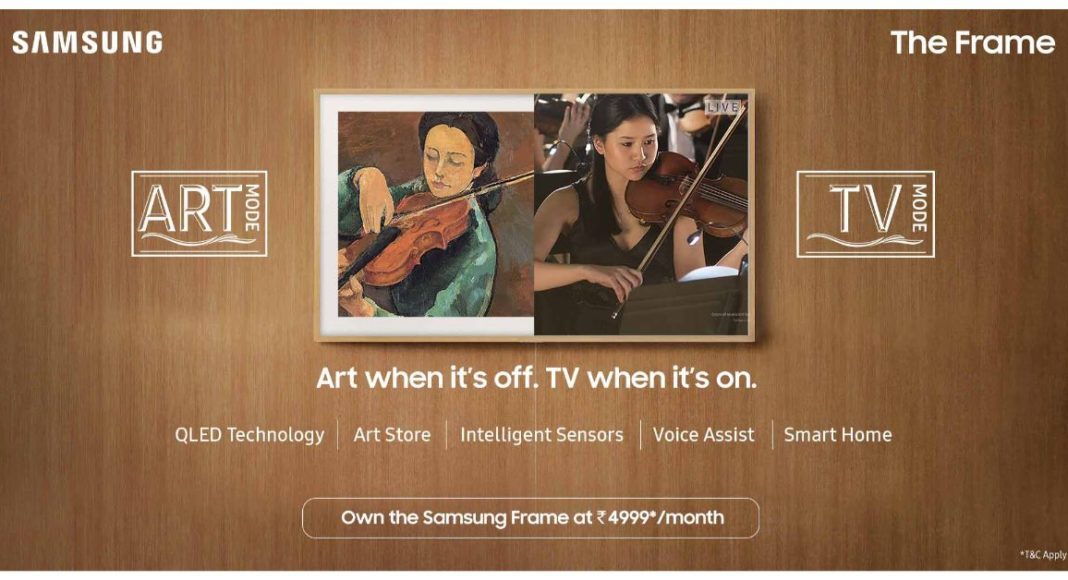 The South Korean electronics giant, Samsung, today announced the launch of its exclusive series of Televisions. The Frame and Smart 7-in-1 TVs are what the company has launched today. The company claims, the Frame is an innovative Television offer by the company that is considered to be an ideal balance of technology, functionality as well as aesthetics while, the Samsung Smart 7-in-1 TV is aimed at young millennials and consumers who like to watch online content. This Smart TV is available in two sizes 32-inches as well as 40-inches. The Frame by Samsung comes in a single size of 55-inches.

Features of The Frame

The Frame comes with a 55-inch QLED display that can be transformed from TV into a picture frame. The Frame showcases more than 1,000 artworks across the globe that can be accessed by signing up for a membership to get unlimited access or the user can choose the artworks from the world’s renowned institutions.

The television offers a 100 percent detailed colour volume. It also comes with built-in motion and brightness sensors that automatically turn off when not in use. The sensors also sense the ambient light because of the brightness sensor without any human intervention stabilises the brightness and colour tone of the screen. This is supported by Samsung’s Quantum Dot technology as well as HDR 10+.

It comes with the support of Bixby and Google Assistant that can be controlled with the user’s voice command, additionally, without any trouble, it can be connected to Smart Devices with the use of SmartThings App and One Remote Control along with built-in AirPlay 2. It allows the user to stream or share content from Apple devices to The Frame with ease. 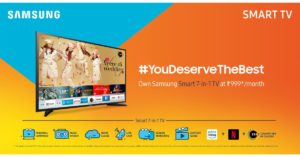 Features of Samsung Smart 7-in-1 series

The Samsung Smart 7-in-1 TV series is available in two display sizes 32-inches with 1366×768 pixels resolution and a 40-inches screen with HyperReal picture engine. Both of them come with features like Personal Computer, which allows the user to transform the TV into a PC. Then it can also be controlled while sitting anywhere with the use of the internet.

The Content Guide assists in it help users to search content according to their likings. Apart from that, it also recommends different king of content to the users. The consumers can enjoy the benefit of online streaming content via pre-installed on-demand apps such as Netflix, Prime Video and Zee5. The TVs come with the Live Cast feature through which the user can live stream with anyone from any location on to their Smart 7-in-1 TV over the internet, via a smartphone.

The television is quantified to be secured by multi-layered Knox that provides access to Microsoft Office 365 services over the cloud. The smart TV can be turned into a virtual music system that grants permission to the user to select skins with different colours within the library. In addition to this, the user can also transfer their favourite picture and videos from their smartphones to the TV. All this, without the need for an internet connection.

Komila Singhhttp://www.gadgetbridge.com
Komila is one of the most spirited tech writers at Gadget Bridge. Always up for a new challenge, she is an expert at dissecting technology and getting to its core. She loves to tinker with new mobile phones, tablets and headphones.
Facebook
Twitter
WhatsApp
Linkedin
ReddIt
Email
Previous articleSamsung Galaxy Watch Active review: Good for fitness enthusiasts
Next articleAmazon Freedom Sale 2019 to offer a discount on OnePlus, Samsung, Nokia smartphones starting Aug 8