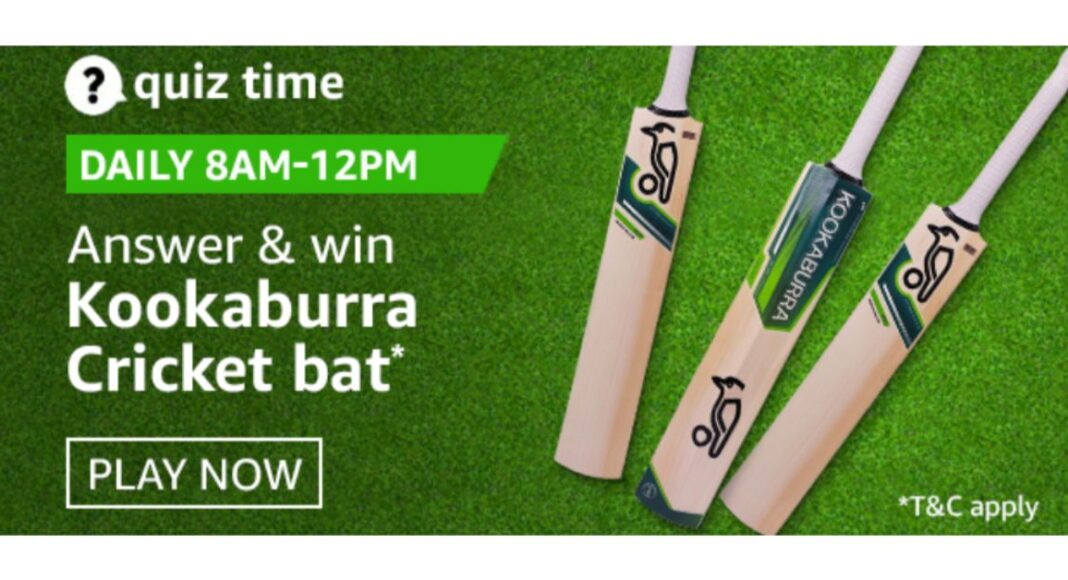 - Advertisement -
The e-commerce platform Amazon is back with another new session of the quiz on its platform and today you can win Kookaburra Cricket Bat. It brings Amazon Quiz sessions for its customers on a daily basis. Customers can stand a chance to win bumper prizes just by playing at home from 8 am to 12 noon. Every day Amazon asks 5 questions that the customers have to answer correctly. This session is only available for the app user in India.

Question 1: Which 20-year-old Indian badminton player will be conferred with the Arjuna award in 2020?

The answer is- Satwiksairaj Rankireddy

Question 2: Ex-CBI officer Rakesh Asthana has been named as the Director-General of which force?

The answer is- Border Security Force

Question 3: Which Indian state has instituted the Indira Rasoi Yojana?

The answer is- Rajasthan

Question 4: Which of these actresses starred in the original 1991 movie ‘Sadak’ and is also starring in the sequel ‘Sadak 2’?

The answer is- Pooja Bhatt

Question 5: After dismissing which Pakistan batsman did James Anderson reach the landmark of 600 wickets in Test cricket?

The answer is- Azhar Ali

To participate in the Amazon quiz all you need to do is download Amazon App from Google Play Store. After downloading the app follow the below-mentioned step:

Komila Singhhttp://www.gadgetbridge.com
Komila is one of the most spirited tech writers at Gadget Bridge. Always up for a new challenge, she is an expert at dissecting technology and getting to its core. She loves to tinker with new mobile phones, tablets and headphones.
Facebook
Twitter
WhatsApp
Linkedin
ReddIt
Email
Previous article
Qualcomm Snapdragon 4-series chipset to get 5G accessibility by 2021
Next article
Realme M1 Sonic electric toothbrush with 90 days battery life launched in India