Smartphone Comparison: Nothing Phone 1 vs iPhone 13

Which smartphone should you buy? 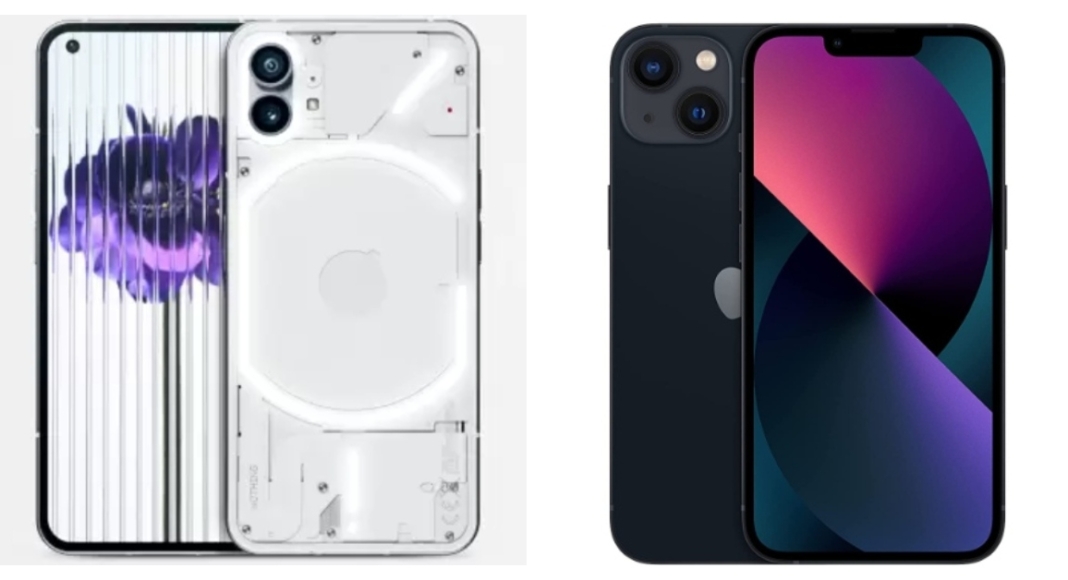 Nothing Phone 1 was officially released in India and worldwide earlier this week. Even before its official announcement, the smartphone gained a lot of popularity for its interesting form factor. The Nothing Phone (1), which has a semi-translucent back and is shaking up the mid-range market but here we have compared the smartphone with the iPhone 13. In order to establish which Smartphone is ideal for which type of user, we will compare Nothing Phone 1 vs iPhone 13 in this post.

Nothing Phone 1: Nothing OS based on Android 12

The semi-translucent exterior of the Nothing phone (1) deviates from the standard with its design by partially disclosing its inside components. The LEDs on the rear of the Glyph Interface can be programmed to display notifications. The finish on the rear is glass as well. Although the iPhone 13 has a unique design of its own, let’s agree that the form factor of Nothing is what makes it stand apart from the iPhone. While the iPhone 13 has an IP68 rating as opposed to the Phone’s 1’s IP53 rating.

Nothing Phone 1 will provide you with an uninterrupted 120HZ AMOLED display with a small dot notch in place of the enormous notch at the top that interrupts the screen on the iPhone 13 in terms of display. Additionally, the iPhone’s display only supports HDR10, while the Phone 1 supports HDR10+.

Performance-wise, the Snapdragon 778G+ SoC and Apple’s own A15 Bionic chipset cannot be compared. However, Qualcomm’s chipset can definitely compete with the flagship devices now on the market.

Although we haven’t yet tested the camera on the Nothing Phone 1, both handsets boast a dual back camera setup with wide and ultrawide sensors, however, their individual performance is probably going to vary. Wait for our comprehensive review of the Nothing Phone 1 to learn more about the camera aspect of things.

Nothing Phone 1 costs much less than the iPhone 13, which has a price that starts at Rs 79,999. What phone ought you to purchase? Nothing is giving you uniqueness, whereas Apple has a different fan base. To upgrade your Android smartphone, choose Nothing Phone 1 if you’re looking for anything new.

Komila Singhhttp://www.gadgetbridge.com
Komila is one of the most spirited tech writers at Gadget Bridge. Always up for a new challenge, she is an expert at dissecting technology and getting to its core. She loves to tinker with new mobile phones, tablets and headphones.
Facebook
Twitter
WhatsApp
Linkedin
ReddIt
Email
Previous article
How to add two gmail accounts on your Android smartphone or tablet?
Next article
Garena Free Fire Redeem Codes Today 14 July 2022: Here is how to claim them