State of mobile phones in 2015 [Infographic] 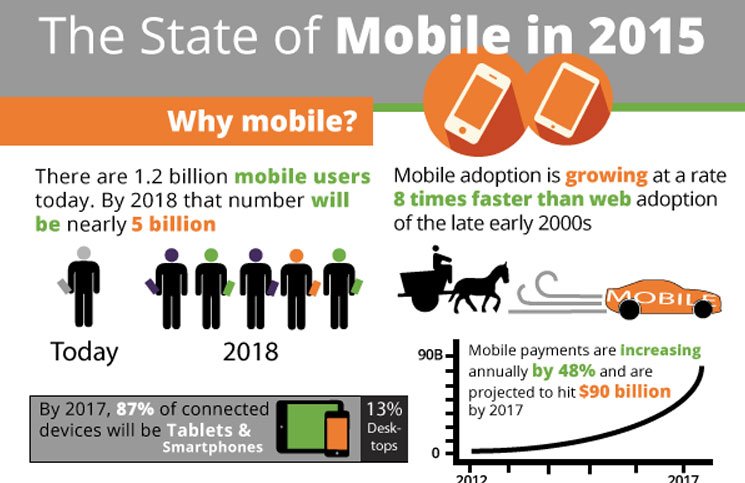 As part of the Gadget Bridge Ace initiative we will bring you new infographics every now and then from the world of gadgets and technology. Here is the first one around the king of gadgets, the mobile phone.

We came across this infographic from Kona Company that reveals some pretty interesting facts about the cell phones. There are over 1.2 billion mobile users worldwide today and the number will jump almost 5 times by 2015. This roughly means over 70% of the world’s population will have a mobile phone in the next 3 years.

Another fact that caught the eye is that the mobile wallet market is growing at a staggering pace. It is seeing grow this as high as 147% yearly. No wonder we see so many Indian companies jumping on to the mobile wallet bandwagon. Advertising on the mobile phone is also growing rapidly thanks to the smartphone and internet penetration. The most lucrative vertical for mobile advertising is entertainment.

Check out the rest of the infographic and interesting facts below below:

Sulabh Purihttp://www.gadgetbridge.com
Sulabh Puri is the Editor In Chief of GadgetBridge.com. A content specialist, he started his career young and it has been a rewarding 15 years for him. Before heading Gadget Bridge, he was the Editor of Times of India (TOI) Technology and GadgetsNow.com. He has also led TOI’s international edit arm as the Editorial Head of Business Insider India and Tech Radar India. He has also worked with various media houses such as the India Today Group and Cybermedia. He loves everything ‘gadgety’ and enjoys tinkering with new tech toys and automobiles. A graduate in commerce from Delhi University, he is also an adept graphic designer. When he is not working, he can be found in the kitchen, cooking mouth-watering chocolate cakes and croissants.
Facebook
Twitter
WhatsApp
Linkedin
ReddIt
Email
Previous article
Motorola slashes the price of Moto 360 smartwatch
Next article
Motorola Turbo Video Review