Tecno Spark 9 set to release in India on July 18

The smartphone is going to launch alongside the Tecno Camon 19 and Camon 19 Neo. 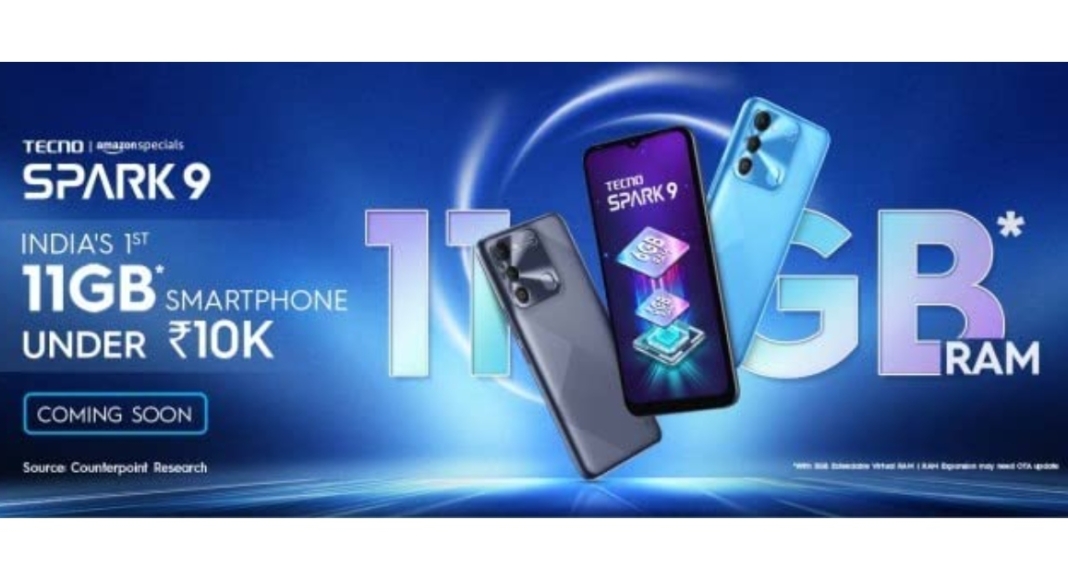 The Chinese smartphone company Transsion Holdings brand Tecno is all set to announce a new smartphone in the Indian market soon. The company officially announced to release Tecno Spark 9 in the country on July 18. Ahead of the official launch, the smartphone has been listed on Amazon providing information about its appearance, features and its availability.

Tecno took to Twitter to announce that it will be launching Tecno Spark 9 in India on July 18. Both Amazon and the company’s official website will offer the Tecno Spark 9 to interested customers. A special microsite has been created on Amazon revealing the key highlights of the smartphone.

The listing also states that the Tecno Spark 9 will be the first smartphone to be priced under Rs 10,000 and to feature 11GB of RAM. However, the precise price has not yet been disclosed. Front-facing waterdrop notch display is found in the Tecno Spark 9. It has a square camera module at the back with a dual camera configuration, a prop camera, and an LED flash to create the appearance of three cameras. There are two colour choices for the phone: Sky Mirror and Infinity Black.

The Tecno Spark 9’s specifications are available on Amazon. The smartphone will sport a 6.6-inch HD+ display with a 90Hz refresh rate and run Android 12. It has 6GB of RAM and an octa-core MediaTek Helio G37 SoC as its power source. The phone also permits the increase of the virtual RAM by 5GB utilising internal storage. It has a dual-camera system on the back. Additionally, the Tecno Spark 9 has a fingerprint reader on the back. It also has a 5,000mAh battery.

Apart from this, the Chinese retailer has hinted that the Tecno Spark 9 will be released in the nation alongside the Tecno Camon 19 and Camon 19 Neo. Last month, both of the new phones were launched in Bangladesh.

Komila Singhhttp://www.gadgetbridge.com
Komila is one of the most spirited tech writers at Gadget Bridge. Always up for a new challenge, she is an expert at dissecting technology and getting to its core. She loves to tinker with new mobile phones, tablets and headphones.
Facebook
Twitter
WhatsApp
Linkedin
ReddIt
Email
Previous article
Garena Free Fire Redeem Codes Today 16 July 2022: Here is how to claim them
Next article
Reliance Digital launched new HP Smart SIM laptop 100GB of free bandwidth: How to avail the offer