Google discussed numerous safeguards it has applied to enhance user safety during its I/O 2022, such as warnings against security issues and suggestions to patch them up. 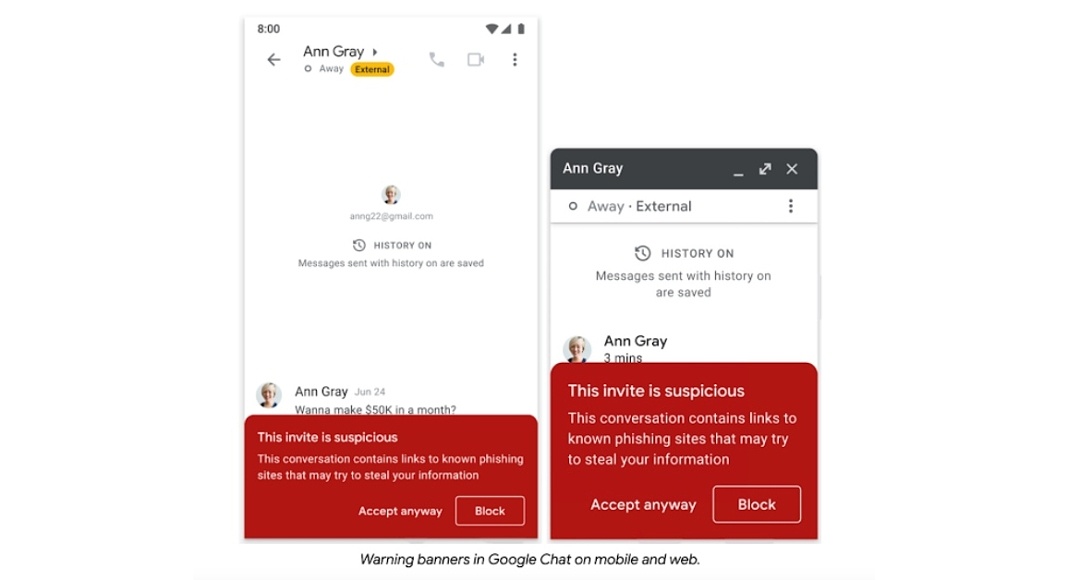 To prevent users from hacker attacks and phishing attacks, Google announced that warning notifications will be displayed in its Chat application. Several security measures were announced by the tech giant during its recent 2022 I/O developer conference, including warnings about vulnerabilities and recommendations for how to fix them.

In its most recent update, Google added these features to Google Chat to help prevent phishing. The new feature will be available to all Google Workspace customers, as well as legacy G Suite Basic and Business customers and users with personal Google accounts, over the next few weeks. Google implemented new privacy controls to give people more control over how their information is used by its apps. The company also launched its second Beta of its Android 13 operating system, which includes a number of new features and user controls as well as privacy and security updates.

You’ll see banners in Google Chat warning you about phishing and malware messages sent by users with personal Google Accounts. These warning banners, which are already available in Gmail and Google Drive, assist users in protecting their data from malicious actors.

For those who are unaware, Google’s new warning banner initially showed up in the workspace account of Gmail to demonstrate attempts to lure those with links and use it for malware, phishing, or ransomware. Google updated the Google Docs banner in late April to warn users that malignant files were believed in some Google Workspace apps that include documents, sheets, slides, and drawings, irrespective of where all the link has been opened.

According to Google, the new security feature of warning banners will be rolling out over a couple of weeks to all users.

Komila Singhhttp://www.gadgetbridge.com
Komila is one of the most spirited tech writers at Gadget Bridge. Always up for a new challenge, she is an expert at dissecting technology and getting to its core. She loves to tinker with new mobile phones, tablets and headphones.
Facebook
Twitter
WhatsApp
Linkedin
ReddIt
Email
Previous article
Oppo Watch Free Review: One of the best smartwatches under Rs 5,000
Next article
Garena Free Fire Redeem Codes Today 23 May 2022: Here is how to claim them