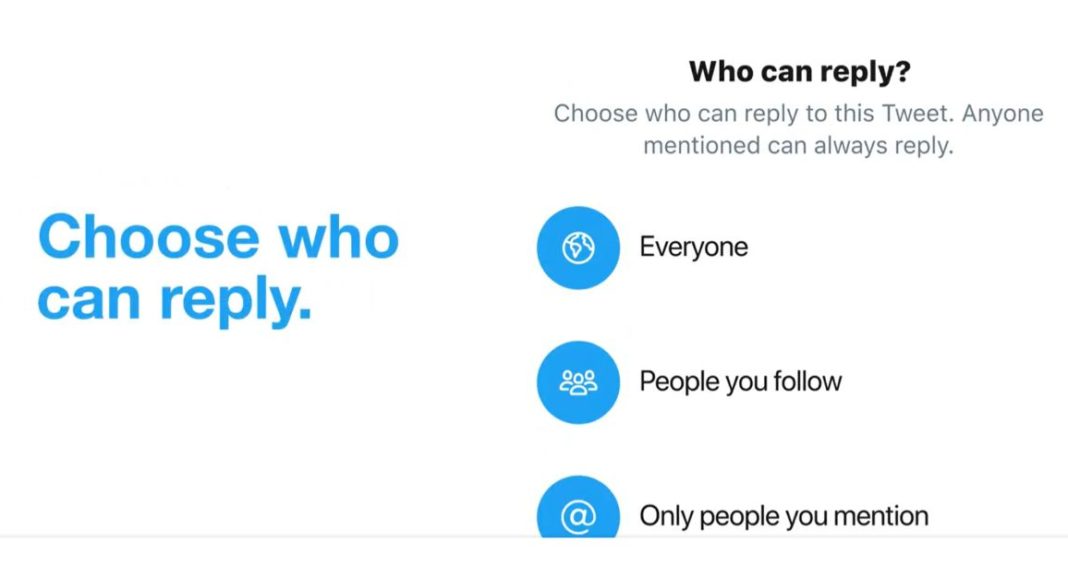 These days popular microblogging website Twitter seems engrossed in bringing new features to its website for better user experience. Recently it released scheduled tweet features on its platform. Now the company has announced that it is testing another new feature allowing the user more control over their twitter profile. This new feature will give access to the users to limit who can comment on their tweets.

The social media giant Twitter announced this new development by sharing a short video giving a demo on how this new feature is going to work. Soon the company will bring reply permission settings that will allow its users to choose who can reply to their tweets. At the moment if a user posts a tweet, those who are following or not following the users are free to respond to their tweet. But now the company is working on adding new permission setting just under the tweet compose window allowing users to make a selection who can reply to that tweet. When the feature is released you will be getting three options, Everyone, People You Follow, and Only People You Mention. This functionality will be helpful to the users when they want to share a tweet with everyone but don’t want any unnecessary replies or hate replies. With this setting now everyone can view and like your conversation but only people you have permitted can reply. While announcing the feature the tweet reads, “Testing, testing… A new way to have a convo with exactly who you want. We’re starting with a small % globally, so keep your out to see it in action.”

A new way to have a convo with exactly who you want. We’re starting with a small % globally, so keep your 👀 out to see it in action. pic.twitter.com/pV53mvjAVT

At the moment the company has planned to roll out this feature to a limited number of users globally to iOS, Android and twitter.com as it is under development. However, there is no word from the company when it will be available for wider rollout but we think it will soon be released for all the users.

Earlier this year Twitter mentioned in a tweet that it is currently working on this feature for giving more control to the users over their conversations. The tweet reads, “We want to help people feel safe participating in the conversation on Twitter by giving them more control over the conversations they start. We’ll be experimenting with different options for who can reply to Tweets in early 2020.”

We want to help people feel safe participating in the conversation on Twitter by giving them more control over the conversations they start. We’ll be experimenting with different options for who can reply to Tweets in early 2020. https://t.co/SLlgboiPQu

Currency Twitter only gives you an option to keep your profile private in order to limit replies from those who are not following the users or they can hide the replies. With the rollout of the new permission setting the company will be able to make conversations on its platform more personal and meaningful.

Twitter’s Director of Product Suzanne Xie in its blog said. “Tweets with the latter two settings will be labeled and the reply icon will be grayed out so that it’s clear for people if they can’t reply. People who can’t reply will still be able to view, Retweet, Retweet with Comment, and like these Tweets,”

Komila Singhhttp://www.gadgetbridge.com
Komila is one of the most spirited tech writers at Gadget Bridge. Always up for a new challenge, she is an expert at dissecting technology and getting to its core. She loves to tinker with new mobile phones, tablets and headphones.
Facebook
Twitter
WhatsApp
Linkedin
ReddIt
Email
Previous article
Tecno Spark 5 with 5,000mAh battery and quad camera launched in India at Rs 7,999
Next article
Xiaomi to introduce new true wireless earphone on May 26 in India, most likely to be Redmi AirDots S