Twitter to begin testing its ‘hide replies’ feature next week

Microblogging website Twitter has been adding new features to its platform in order to make it better for its users. The latest one among these will give Twitter users more control over which comments are visible in a conversation that has been started by them. The new Twitter feature is called ‘Hide Replies’.

The company has spoken about this feature a few times this year and is also said to be testing it, but now, it will begin rolling it out to Twitter users in Canada.

With the new feature, when you look at a reply on your tweet that you don’t want other users to see, you can select it and then tap on the ‘Hide Reply’ option. But then, we should point out that by doing this, you would not be able to remove these posts from Twitter. Instead, they would just be hidden from the default view. Another thing worth adding is that other users may still be able to read it by tapping on the Gray icon to view hidden replies. So basically, it will work a lot like deleted comments on Reddit do, which is another platform where people come to have discussions and talk about their opinions.

Twitter’s Michelle Yasmeen Haq and Brittany Forks have explained the feature in detail saying, “Everyday, people start important conversations on Twitter, from #MeToo and #BlackLivesMatter, to discussions around #NBAFinals or their favourite television shows. These conversations bring people together to debate, learn, and laugh. That said we know that distracting, irrelevant, and offensive replies can derail the discussions that people want to have. We believe people should have some control over the conversations they start.”

They have also added that the company is still looking for ways to improve the feature. They said, “By testing in one country we want to get feedback and better understand how this tool can improve before it’s available globally.” 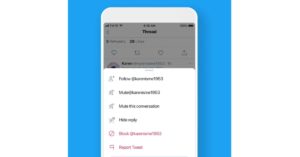 A potential downside of the feature is that people may start hiding some tweets that do have the right facts only because they conflict with their point of view. But then, it is also a much-needed step because it will also help people hide replies from those who troll on social media. Twitter, like any other social media platform today, has a lot of hateful content posted by people, so it had to begin somewhere to combat it.

So, while it is a welcome step by the company, there will be ways in which it can be improved to meet the required purpose.

Avani Baggahttp://www.gadgetbridge.com
Avani has an immense love for reading, travelling and food, but not necessarily in the same order. Avani almost started pursuing law, but life had other (better) plans for her and she chose to be a writer instead (luckily!) She previously covered technology at Times Internet and wrote about smartphones, mobile apps and tech startups. When she’s not writing, you’ll be able to find her in book stores or catching up on her social life.
Facebook
Twitter
WhatsApp
Linkedin
ReddIt
Email
Previous articleRedmi 7A to go on sale in India again on July 18
Next articleInfinix Note 6 with X Pen Stylus launched: Price and specifications