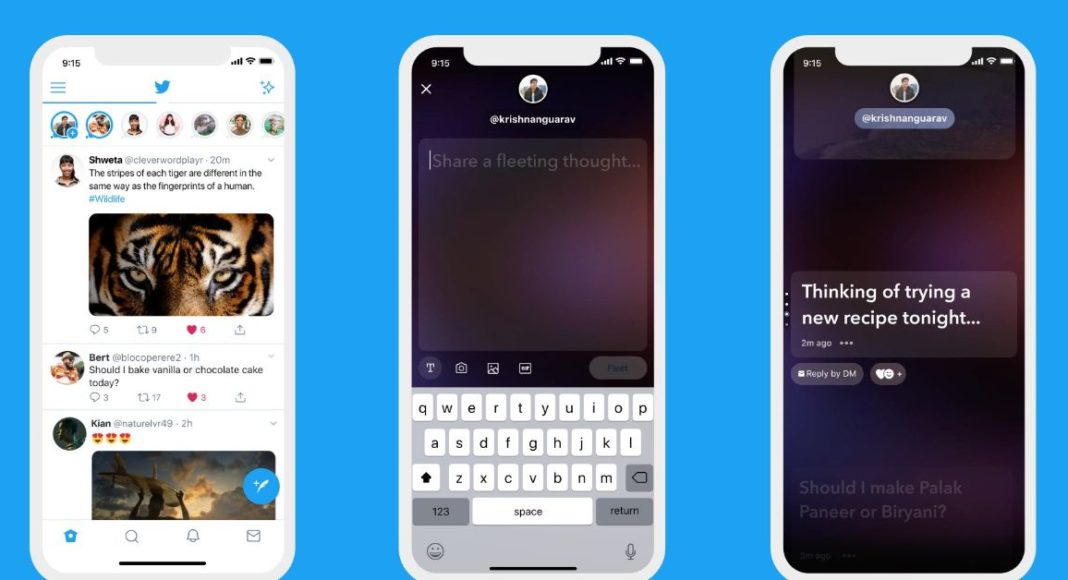 The microblogging website Twitter has rolled out a new feature on its platform. After bringing scheduling and limiting replies on tweets the platform has introduced  “Fleets”. The feature is now available to Android and iOS users in India. According to the company, the feature will be rolled out in a staged manner for the users in the country along with the latest version of its mobile app update. The feature’s functionality is similar to WhatsApp’s status and Instagram and Facebook stories. Twitter’s Fleets will vanish after 24 hours from the user’s timeline. Unlike tweets, Fleets can’t receive Likes, Replies or Retweets. One can just respond to the Fleets via Direct Message.

Fleets were first introduced in Brazil and Italy back in March this year. Now Twitter’s product lead Kayvon Beykpour announced the availability of this feature in India via Twitter. The tweet reads, Namaste! Starting today, Fleets are coming to India. If you’re in India, check it out and let us know what you think! #FleetsFeedback” With the arrival of Fleets one can share their everyday things on Twitter. Unlike stories which are private and can only be viewed by those who are following you, Fleets can be viewed simply by visiting someone’s profile and tapping on the top of the screen. But it cannot be shared or embedded on a third-party platform, unlike tweets.

After rolling out to Brazil and Italy the feature has been expanded to India. In the country, the microblogging website had around  55 million active users in April this year.

According to a report by TechCrunch, Manish Maheshwari, Managing Director at Twitter India, said in a statement, “India is important for Twitter since it is one of our largest and fastest-growing audience markets globally. We are excited to bring the Fleets experiment to India and make it one of the first three countries in the world to experience this new product. From the test in India, we’ll learn how adding a new mode of conversation changes the way Indians engage on Twitter. It’ll also be interesting to see if it further amplifies the diversity of usage by allowing people to share what they’re thinking in a way that is light-touch and light-hearted”

How does Fleets work and how to post it?

Fleets are as simple as sharing your stories over Facebook and Instagram which disappears after 24 hours after being posted on your profile. It appears at the top of the home screen.

This feature is currently available on the mobile platform only. If you have updated your Twitter app and have access to Fleets you can post your everyday things, thoughts, pictures and more by tapping on the + icon.

Komila Singhhttp://www.gadgetbridge.com
Komila is one of the most spirited tech writers at Gadget Bridge. Always up for a new challenge, she is an expert at dissecting technology and getting to its core. She loves to tinker with new mobile phones, tablets and headphones.
Facebook
Twitter
WhatsApp
Linkedin
ReddIt
Email
Previous article
HP 14s and HP Pavilion x360 14 launched with 4G LTE connectivity in India
Next article
Vu Ultra 4K TV series launched in India with parental block feature