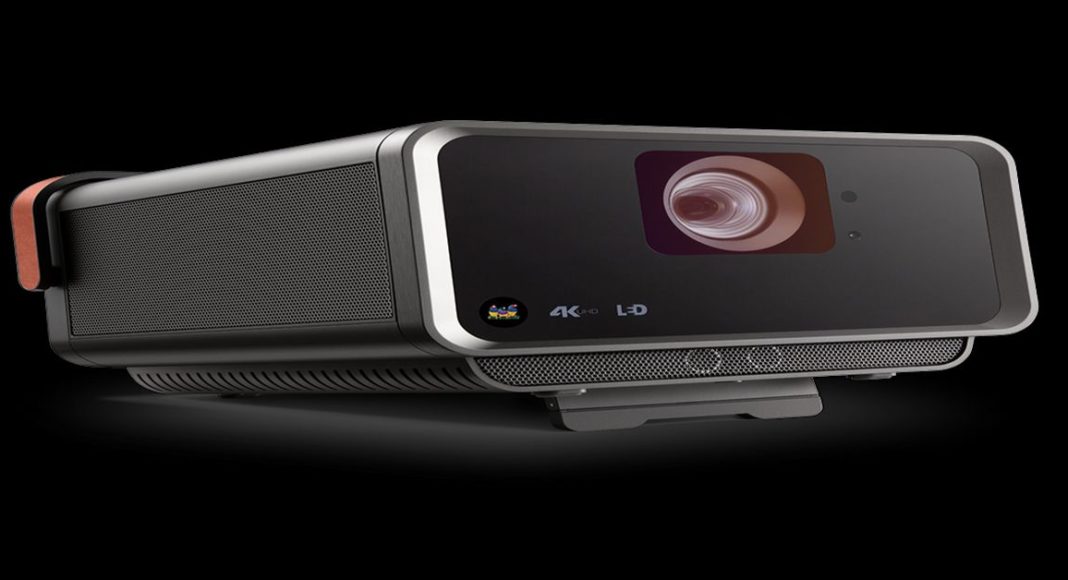 Viewsonic, a company known for making visual products like monitor, displays and projectors has launched a 4K projector named X10-4K LED at an event in Mumbai today. Two other projectors as well were launched alongside the 4K projector – M1+ portable projector and the LS800 HD.

Speaking about the launch of the new products, Muneer Ahmad, Business Head of Projectors, ViewSonic India said “We are delighted to launch X10-4K, LS800 HD and M1+ projectors with an aim to provide high quality products to our customers. The new 4K Ultra HD Lamp Free Smart Theatre X10-4K LED Portable Projector delivers impressive display and intelligent performance. Continuing our legacy of providing the best of products to our audience, the new projectors are packed with the latest smart technologies giving users an incredible and truly immersive visual and audio experience.”

The ViewSonic X10 4K projector features Amazon Alexa and Google Assistant Voice Control compatibility, which basically means that the projector can register sound and can be controlled by voice commands. It also packs an integrated Smart TV interface so that the user can stream TV shows and movies from online sources like YouTube and Netflix. The projector comes with an integrated Harmon Kardon speakers and other built-in smart technologies. The newly launched device includes HDMI 2.0/HDCP 2.2, USB 2.0 Type-A, Type-C, Audio In/Out, and RJ45 for connectivity.

The X10 4K LED portable projector sports a DLP 4K Ultra HD (3840 x 2160 pixel) chip with XPR technology. It promises an operational life of up to 30,000 hours and comes with a built-in OS and Android Aptoide store from where the user can download apps. The 4K LED projector from ViewSonic features 125% of Rec.709 colour accuracy and Frame Interpolation technology which reduces motion blur and ensures fluid multimedia content projection. Along with that, it has HDR content support which promises detailed video playback, contrast, and vivid colors. It has a lightweight design and is easily carriable as it comes with a handle.

The other projector launched by the company is the ViewSonic M1+ LED ultra-portable projector. Just like the X10 4K LED projector, the M1+LED projector is also mobile and weighs less than two pounds. It comes with a built-in battery that, according to the company, will give up to six hours of battery life and the LEDs used in it has up to 30,000 usage hours. It comes with 300 ANSI lumens of brightness and 1,20,000:1 contrast ratio along with dual Harman Kardon speakers.

For connectivity, the ViewSonic M1+LED ultra-portable projector comes with Bluetooth, HDMI, USB 2.0, USB Type C, Audio Out and a MicroSD card reader. It packs the solid-state LED technology which makes the projector mercury and lamp free. It costs Rs 60,000 and will be available from Spring of 2019.

The last projector unveiled by the company is named ViewSonic LS800HD and it is a Full HD 1080p phosphor-based projector. It features a brightness of 5,000 ANSI Lumens and a contrast ratio of 1,00,000:1 with up to 30,000 hours of light source life. The LS800HD comes with ViewSonic’s SuperColor technology and it promises to deliver advanced colour reproduction. Unlike the abovementioned projectors from ViewSonic, the LS800HD is focused mainly for the offices and schools or universities.

Aman Singhhttps://www.gadgetbridge.com/
Aman Kumar Singh has a Masters in Journalism and Mass Communication. He is a journalist, a photographer, a writer, a gamer, a movie addict and has a love for reading (everything). It’s his love of reading that has brought him knowledge in various fields including technology and gadgets. Talking about which, he loves to tweak and play with gadgets, new and old. And when he finds time, if he finds time, he can be seen playing video games or taking a new gadget for a test run.
Facebook
Twitter
WhatsApp
Linkedin
ReddIt
Email
Previous articleOnePlus 5, OnePlus 5T’s latest update roll out Google Duo integration
Next articleFacebook now lets you share events via Stories