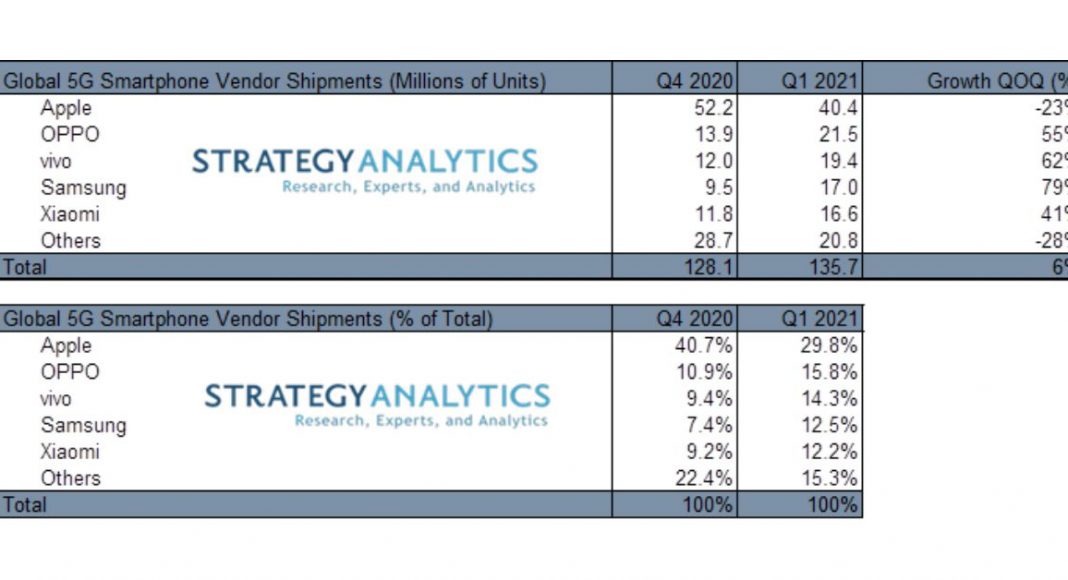 The South Korean brand grew to 79% QoQ to 17 million units shipped. The new 5G models, such as Galaxy S21 5G, S21 ultra 5G and S21+ 5G, are said to have performed well in South Korea, North America, and parts of Europe. Whereas Vivo was the second-fastest-growing 5G smartphone vendor in Q1 2021, jumping 62% QoQ to 19 million units shipped.  iQoo U3 5G and U7 5G smartphones are the biggest contributors while China and Europe are its 5G smartphone strongholds. Oppo has recorded 55% QoQ growth on the other hand Xiaomi increased 41% QoQ, both due to solid volumes at home in China. Apple performance dropped to 23% QoQ, following a blowout Q4 2020.

Another analysis by Counterpoint states that Vivo has the highest share in the smartphone market during the mid-year shopping festival in China. The data stated that sales rose by 7% YoY. The company took the first spot during the first three weeks of June, making up 23% of the smartphone sales of the top eight OEMs. Whereas the second and third spots went to OPPO (21%) and Xiaomi (19%). Honor’s performance has improved after separating from Huawei. Its sales in the first three weeks of June increased more than 15% when compared to the first three weeks of May. Moreover, Apple’s sales also increased by 16% YoY during the shopping festival, taking it to the fourth spot. On the other hand Realme sales also increased more than tenfold from last year as it is said to have offered various discounts but also introduced the Q3 Pro Carnival Edition.

Komila Singhhttp://www.gadgetbridge.com
Komila is one of the most spirited tech writers at Gadget Bridge. Always up for a new challenge, she is an expert at dissecting technology and getting to its core. She loves to tinker with new mobile phones, tablets and headphones.
Facebook
Twitter
WhatsApp
Linkedin
ReddIt
Email
Previous articleSamsung Galaxy Unpacked event to take place on August 11: Report
Next article6 July 2021 Amazon Quiz: Answer all the questions to win Rs 20000 Amazon Pay Balance