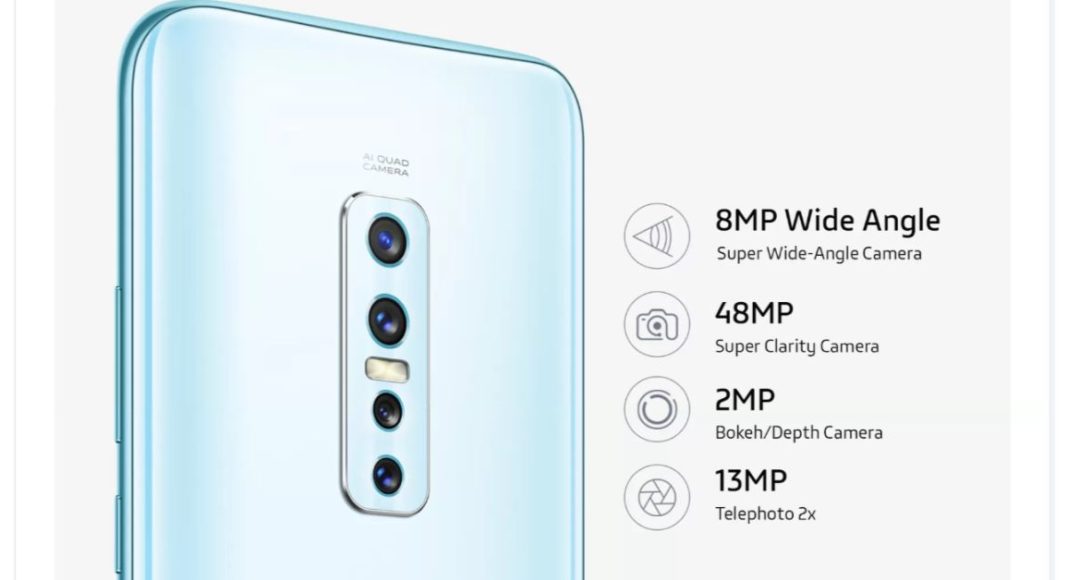 Today Vivo launched another new smartphone in India. At a dedicated launch event hosted in New Delhi, the company launched the much-awaited Vivo V17 Pro in the country. It is a photography centric smartphone that comes loaded with six camera sensors, four on the back panel with a 48-megapixel main sensor along with dual pop up selfie camera with 32 + 8-megapixel sensors. The dual elevating cameras are the biggest selling point of the newly launched phone. The phone’s camera comes with various features like Pose Master, Super Night Mode and Shot Refocus.

The company has introduced Vivo V17 Pro in two colour options Midnight Ocean and Glacier Ice. The smartphone will be available in single 8GB of RAM along with up to 128GB of internal storage. The company has launched the device at a price tag of Rs 29,990 and is now up for pre-bookings. The smartphone will start selling on Flipkart as well as Vivo India online store from September 27.

For the launch offers buyers of Vivo V17 Pro will get 10 percent cashback if purchased using HDFC Bank, ICICI Bank, HDB Bank cards. On purchasing the phone, the company is also offering One-time screen replacement to the buyers. Jio subscribers buying the phone can avail benefits worth Rs 12000.

Vivo V17 Pro features a 6.44-inch full-HD+ 1,080×2,440 pixels Super AMOLED display with a 20:9 aspect ratio with Schott Xensation UP for protection. It comes integrated with an in-display fingerprint sensor. The device is powered by an octa-core Qualcomm Snapdragon 675 SoC octa-core processor clubbed with up to 8GB of RAM along with up to 128GB of internal storage. It is reportedly run on Android 9 Pie with FuntouchOS 9.1 on top. The phone comes with a glass back cover with Corning Gorilla Glass 6 for protection.

To give it life it houses a 4100mAh battery along with dual fast charging support. For connectivity, it has Wi-Fi 802.11ac, Bluetooth v5.0, GPS/ A-GPS, NFC, USB Type-C port, and a 3.5mm headphone jack. While the sensors on the phone include a fingerprint scanner, Accelerometer, Ambient light sensor, Proximity Sensor, E-compass and Gyroscope.

Komila Singhhttp://www.gadgetbridge.com
Komila is one of the most spirited tech writers at Gadget Bridge. Always up for a new challenge, she is an expert at dissecting technology and getting to its core. She loves to tinker with new mobile phones, tablets and headphones.
Facebook
Twitter
WhatsApp
Linkedin
ReddIt
Email
Previous articleiOS 13 is out, check out the new features
Next articleXiaomi Redmi 8A gets listed on Flipkart to launch on September 25