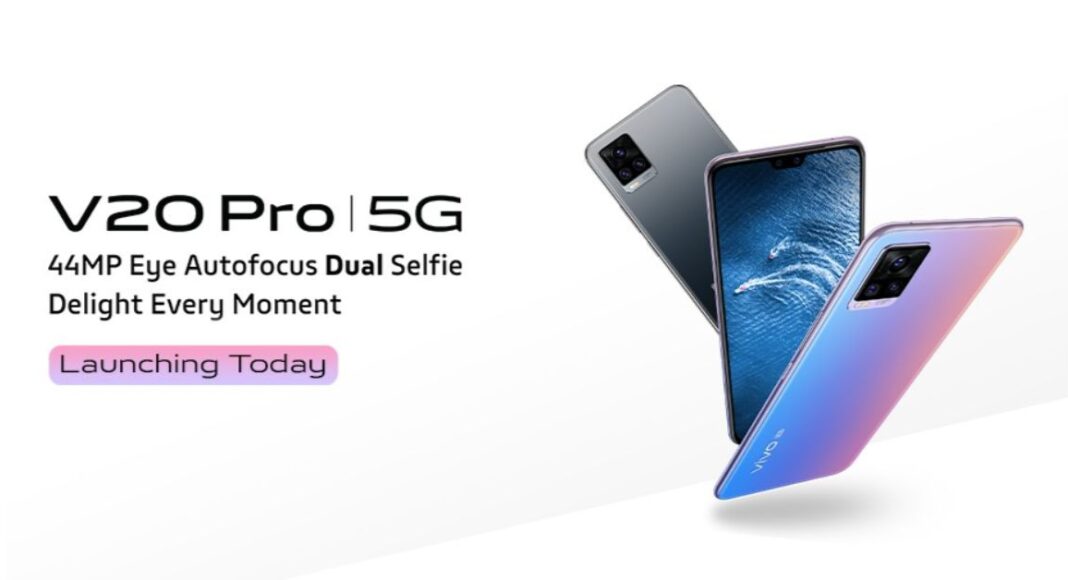 After launching Vivo V20 and V20 SE to its new line up the Chinese smartphone company Vivo is all geared up to unleash Vivo V20 Pro in the country today. To recall the smartphone was launched along with the regular variant in Thailand last month that comes with dual selfie cameras, a triple rear camera setup and is powered by a Qualcomm Snapdragon 765G processor.

Today the company is likely to host a virtual event to announce the arrival of its new phone Vivo V20 Pro 5G. Also, there has been no online launch details, the media invites only mentions the date of the launch that is December 2.

The company has not yet officially revealed the pricing of Vivo V20 Pro but the price has been disclosed by offline as well as online retailers in the country just ahead of the launch. Last week the company started taking registration for the device through offline channels where the price of the device is suggested to be at Rs 29,990. In addition to this, the bank offers include 10 percent cashback via ICICI Bank and Bank of Baroda, easy EMI options, and Jio benefits, among others.

More recently the smartphone also got listed by Indian online retailers such as  Reliance Digital, Sangeethamobiles, and Poorvikamobile therefore revealing the price of the upcoming device. As per the listing, the upcoming device will be carrying a price tag of Rs 29,990 for the 8GB RAM with a 128GB storage option. In addition to this, the device can now also be pre-booked at just Rs 2,000.

Although Vivo V20 Pro 5G has already made its debut in Thailand so we are already aware of its full specifications. The device will be featuring a 6.44-inch full-HD+ AMOLED display with 1,080×2,400 pixels of resolution and a 20:9 aspect ratio with HDR10 support. It runs Funtouch OS 11 on top of Android 10 and will be powered by an octa-core Qualcomm Snapdragon 765G processor for 5G support paired with 8GB of RAM and 128GB of storage option.

For connectivity, it has 5G, 4G LTE, Wi-Fi, Bluetooth, GPS/ A-GPS and a USB Type-C port. The device is fuelled by a 4,000mAh battery that supports a 33W FlashCharge fast charging solution.

Komila Singhhttp://www.gadgetbridge.com
Komila is one of the most spirited tech writers at Gadget Bridge. Always up for a new challenge, she is an expert at dissecting technology and getting to its core. She loves to tinker with new mobile phones, tablets and headphones.
Facebook
Twitter
WhatsApp
Linkedin
ReddIt
Email
Previous articleDecember 2 Flipkart Daily Trivia Quiz Answers: Answer to win exciting prizes
Next articleXiaomi Mi 10i likely to launch in India, Google Console listing suggests