The device first debuted in Malaysia in April this year 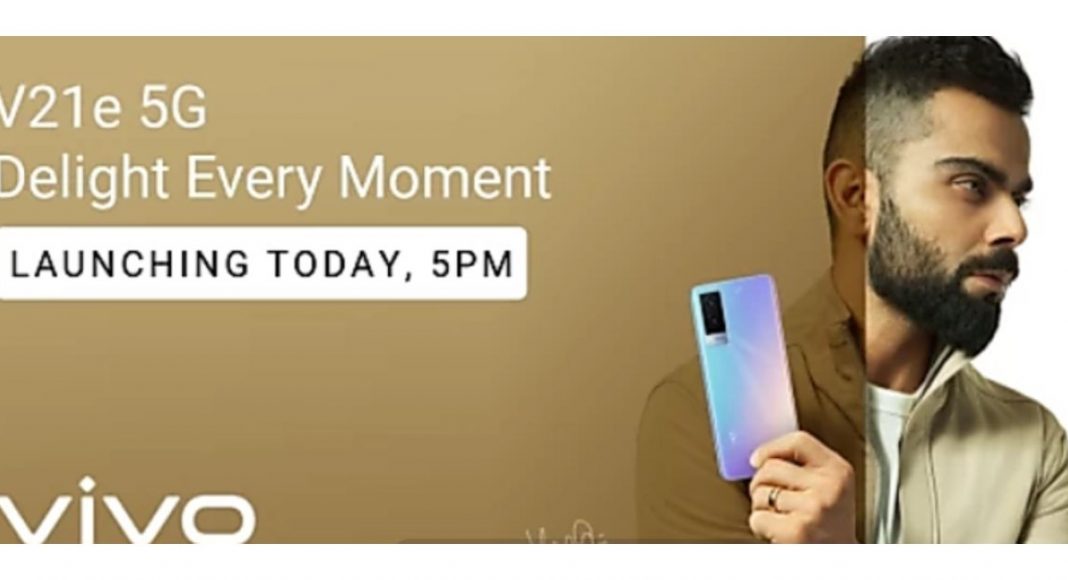 The Chinese smartphone company, Vivo, is all set to launch its new smartphone in its premium mid-range V-Series. The company will be introducing Vivo V21e 5G in the Indian market today as its second addition to the Vivo V21 line-up. The device also got listed on Flipkart ahead of the official announcement. As per the microsite the phone will be offered in an 8GB of RAM and to carry 44W fast charging support.

As per the company Vivo V21e 5G will be launching in India at 5 PM in the evening today. Before arriving in the country the device was first launched in Malaysia a few months back with an octa-core Qualcomm Snapdragon 720G SoC paired with 8GB of RAM and 128GB of storage. Whereas a Geekbenck listing suggests that it would be carrying a MediaTek Dimensity 700 SoC that may be paired with 8GB of RAM. The Geekbench scores are 462 in single-core tests and 1,502 in multi-core. Moreover, it would also ship Android 11 out of the box.

Rumours suggest that Vivo V21e 5G will be featuring a 6.44-inch Full HD+ AMOLED display and fuelled by a 4,400 mAh battery with 44W fast charging support. On the other hand, the dedicated microsite on Flipkart suggests that the upcoming smartphone will be 8GB RAM with 3GB expandable RAM and a 44W fast charging support. Additionally, there will be a 32-megapixel selfie camera and a dual camera set up on the back of the phone highlighted with a 64-megapixel primary sensor. It will also come in two colour options. To recall, in Malaysia it was made available in two different shades of Diamond Flare and Roman Black.

Komila Singhhttp://www.gadgetbridge.com
Komila is one of the most spirited tech writers at Gadget Bridge. Always up for a new challenge, she is an expert at dissecting technology and getting to its core. She loves to tinker with new mobile phones, tablets and headphones.
Facebook
Twitter
WhatsApp
Linkedin
ReddIt
Email
Previous article
June 24 Flipkart Daily Trivia Quiz Answers: Answer to win exciting prizes
Next article
Microsoft Event: Windows 11 launching today, here is how you can watch the event live and what to expect