Here is how to watch the launch event live. 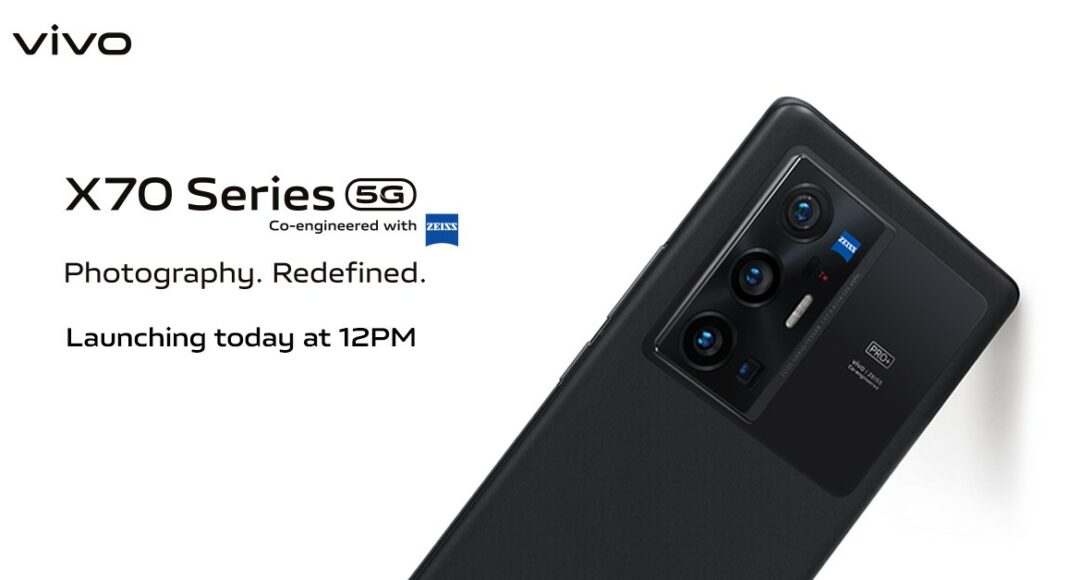 Vivo X70, Vivo X70 Pro and Vivo X70 Pro+ India launch is all set to take place today. The maker will take the covers off from its most premium smartphone series that earlier debuted in China ahead of the Indian launch.

The company has not yet revealed how many devices from the lineup will hit the store in the country but the teasers definitely confirm the top of the line Pro+ model along with pro model might come to India. Read on to know the launch details and its expected pricing.

Vivo X70 5G series is scheduled to launch in India today. The company has planned to host a virtual launch event that will begin at 12 noon. The India launch event can be watched live on the company’s official youtube channel as well as on its social media channels. You can also watch the event on our website as we have embedded the link below:

As for the pricing, the company has not yet revealed any details. Industry insiders say that the Vivo X70 Pro will be made available in two variants: 8GB RAM with 128GB storage at Rs 46,990 while the 12GB RAM with 256GB of storage is likely to be priced at Rs 54,990.

On the other hand, Vivo X70 Pro+ is expected to come in a single 12GB RAM with 256GB of storage that will be priced at around Rs 69,990. The expected price of the vanilla variant is not yet revealed.

Starting with the vanilla X70, the phone features a 6.56-inch full HD AMOLED display with a 120Hz refresh rate and HDR support. It will run on OriginOS 1.0 on top of Android 11 and be powered by MediaTek Dimensity 1200 SoC paired with ARM G77 GPU. For the cameras, it includes a triple rear camera set up that includes a  40MP primary sensor, a 12MP ultra wide-angle sensor and a 12-megapixel portrait sensor. For selfies, there will be a 32MP front-facing camera. The device will pack a 4,400mAh battery with 44W Flash Charge fast charging support.

Vivo X70 Pro which has a similar display as the standard model but is powered by Exynos 1080 SoC paired with ARM G78 GPU. There is a quad rear camera set up on the handset that includes a 50MP primary sensor. The 12MP sensors are the same as above along with an additional 8MP periscopic lens. The selfie camera sensor is also the same. It has a 4,450mAh battery with similar charging support.

Last but not least Vivo X70 Pro+ is the most premium of them all and will come with a  6.78 ultra HD AMOLED display and 120Hz refresh rate support. Under the hood, there is the most powerful Qualcomm Snapdragon 888+ SoC paired with an Adreno 660 GPU.

The quad-camera set up on the X70 Pro+ will include a 48MP Sony IMX578 ultra-wide-angle sensor, a 50MP primary sensor, a 12MO portrait and an 8MP periscope lens. The selfie camera remains the same however there is a 5,000mAh battery with 55W Flash Charge with 50W Wireless Flash Charge fast charging support.

Komila Singhhttp://www.gadgetbridge.com
Komila is one of the most spirited tech writers at Gadget Bridge. Always up for a new challenge, she is an expert at dissecting technology and getting to its core. She loves to tinker with new mobile phones, tablets and headphones.
Facebook
Twitter
WhatsApp
Linkedin
ReddIt
Email
Previous article30 September 2021 Amazon Quiz today answers: Answer to win Rs 10,000 Amazon Pay Balance
Next articlePoco C31 launching in India today: Here is how to watch the Livestream