WhatsApp beta version spotted with a QR Code Shortcut: Here’s more on it

The feature is being tested right now and is expected to come to the stable version of the app too.

Instant messaging platform WhatsApp keeps on getting new features that make it more useful and relevant. Last week, the company reportedly started testing a feature that allows its users to share their status on Facebook, Instagram stories, Gmail and Google Photos directly from the app itself. Now, WhatsApp’s dedicated QR Code Shortcut has been spotted in the beta version of its Android app.

WABetaInfo shared the report about this on its official Twitter handle and shared a screenshot of the feature as well. The tweet reads, “In the WhatsApp beta for Android 2.19.189 update, WhatsApp is working on a QR Code shortcut (it’s not visible yet). The feature will be enabled in future.”

According to the screenshot, it can be seen that soon the users would be able to access the QR code feature on the app using the dedicated button. The tweet says that the company is still working on this new feature and will soon release it for the users. 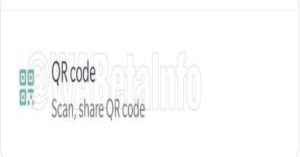 This new feature was first spotted in November last year. As the name suggests, it allows the user to share their profiles by scanning QR codes. It is similar to Nametag scanning on Instagram.

With the feature, if the user wants to share his contacts information, he can do so just by tapping on the QR button in his profile. On doing this, the users will see a QR code on their profile that can be used by other users to add them as contacts just by scanning it via their cameras.

As of now, there is no word from the company about when this new feature will be rolled out to the stable version of the app. Many other apps like Instagram and LinkedIn let users share their profile to other users via QR codes.

As we mentioned earlier, recently, WhatsApp rolled a new feature for all the users of its beta programme. The new feature allows the users to share their photos and videos that they shared on their WhatsApp status to Facebook, Instagram, Google and Google Photos from the app itself. WhatsApp status is a feature that allows the user to share their pictures and videos on their profile that disappear after 24 hours. Status on WhatsApp is exactly like Stories on Facebook, Instagram, Messenger, and Snapchat.

Currently, this new feature has been released for WhatsApp beta version 2.19.151 for Android. The company is expected to release it for iOS soon.

Komila Singhhttp://www.gadgetbridge.com
Komila is one of the most spirited tech writers at Gadget Bridge. Always up for a new challenge, she is an expert at dissecting technology and getting to its core. She loves to tinker with new mobile phones, tablets and headphones.
Facebook
Twitter
WhatsApp
Linkedin
ReddIt
Email
Previous articleHonest Copying: Xiaomi has honestly copied Apple’s Memoji in its new Mimoji feature?
Next articleVivo Z1 Pro with a 32MP in-display selfie camera launched in India: Price and specifications