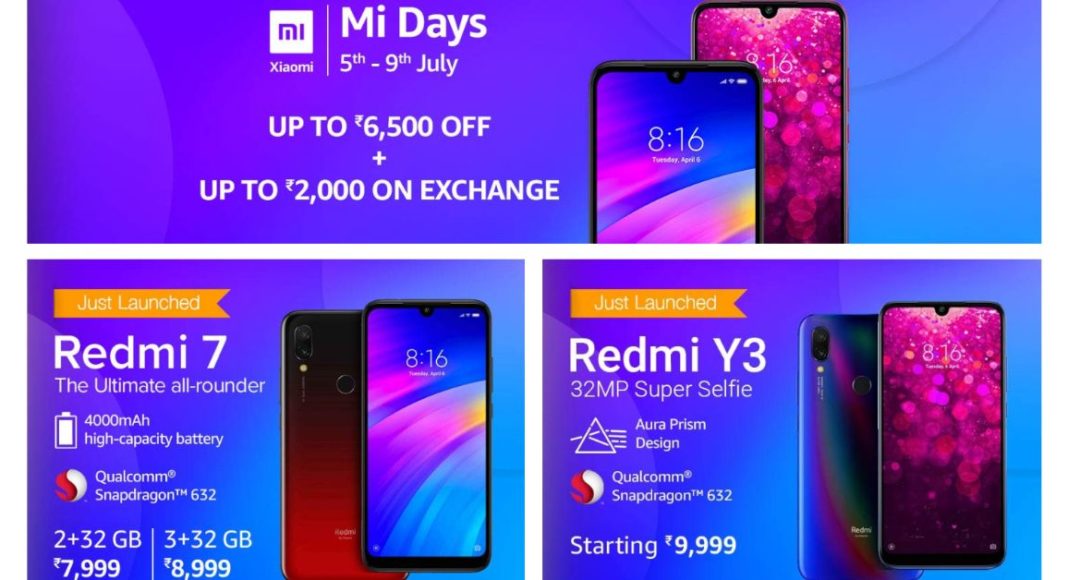 Chinese technology company Xiaomi is back with its Mi Days Sale on Amazon India and Flipkart. As always, the company will be selling its smartphones and accessories at big discounts during the sale that begins from today and will go on till June 9. The company is offering a discount of up to Rs 6,500 on its products. In addition to this, the buyers can get up to Rs 3,000 off on exchanges.

Coming to the discounts, Xiaomi is offering great discounts and offers during Mi Days sale.

Xiaomi will also be offering the Redmi Note 7 Pro with 6GB RAM/64GB storage and 6GB RAM/128GB storage options via an open sale through Flipkart and Mi.com. The next flash sale for Redmi Note 7 Pro 4GB + 64GB variant has been scheduled for July 12.

Besides this, Redmi 6 handset, that features 12MP+ 2MP dual camera and runs on Android Oreo v8.1 operating system with 2GHz Mediatek P22 octa core processor being sold for Rs 6,999 for its 3GB RAM/32GB storage variant during the Mi Days Sale.

Komila Singhhttp://www.gadgetbridge.com
Komila is one of the most spirited tech writers at Gadget Bridge. Always up for a new challenge, she is an expert at dissecting technology and getting to its core. She loves to tinker with new mobile phones, tablets and headphones.
Facebook
Twitter
WhatsApp
Linkedin
ReddIt
Email
Previous articleRealme 2 starts receiving Android Pie based ColorOS 6 update in India
Next articleAsus ROG Phone 2 launch scheduled for July 23, company confirms