Xiaomi is working on a smartphone with periscope camera lens: Report

Other devices with similar cameras that have been launched include Huawei P30 Pro and Oppo Reno 10X Zoom.

Chinese technology company Xiaomi is reportedly working on a new smartphone that will come with a periscope camera lens. A report that has just surfaced online recently cites the company’s recent application with the State Intellectual Property Office of China.

According to the report, that first surfaced online on Chinese publication called MyDrivers, the application has been titled as ‘Camera Components and Electronic Devices’ and it suggests that the company is working on a handset with a periscope camera lens. We should mention that this kind of camera has been used in the past by companies and it offers optical zoom capabilities without increasing the thickness of the camera and lens modules.

We should mention that the patent carried an application number ‘CN201822150093.2’, and has the date December 20, 2018, written on it. While this was released to the public a few days back, as of now, it is not known which of Xiaomi’s upcoming handsets will come with a periscope camera lens.

But then, since it is a premium feature, it is expected to be present on a high-end smartphone only. Currently, the only high-end smartphone that Xiaomi is set to launch is Mi Mix 4, which will be a flagship of the company. A recent report about the smartphone suggested that it will come with a 64MP sensor.

It is also worth pointing out that with most patents, it is never clear whether the company is developing the technology to patent it or to launch it in an upcoming smartphone. As we mentioned earlier, flagships from other companies like Huawei P30 Pro and Oppo Reno 10X Zoom have already used a periscope lens to offer a great photography experience to its audience. 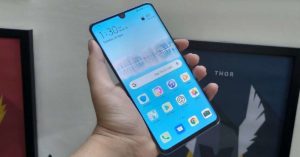 Huawei P30 Pro, as well as Oppo Reno 10X Zoom,  have been launched in India already. While Huawei’s flagship that comes with digital zooming capabilities of up to 50x is priced at Rs 71,990 in India for its lone 8GB RAM/256GB storage variant, Oppo Reno 10X Zoom was launched at Rs 39,990 for its base variant that comes with 6GB RAM/128GB storage. The high-end variant of the device that has 8GB of RAM and 256GB of internal storage can be bought at Rs 49,990.

In fact, Huawei is now expected to launch its Mate 30 Pro smartphone in the second half of the year, and much like P30 Pro, the handset will also come with four cameras on its back panel.