Xiaomi K30 is releasing on December 10: Everything to know 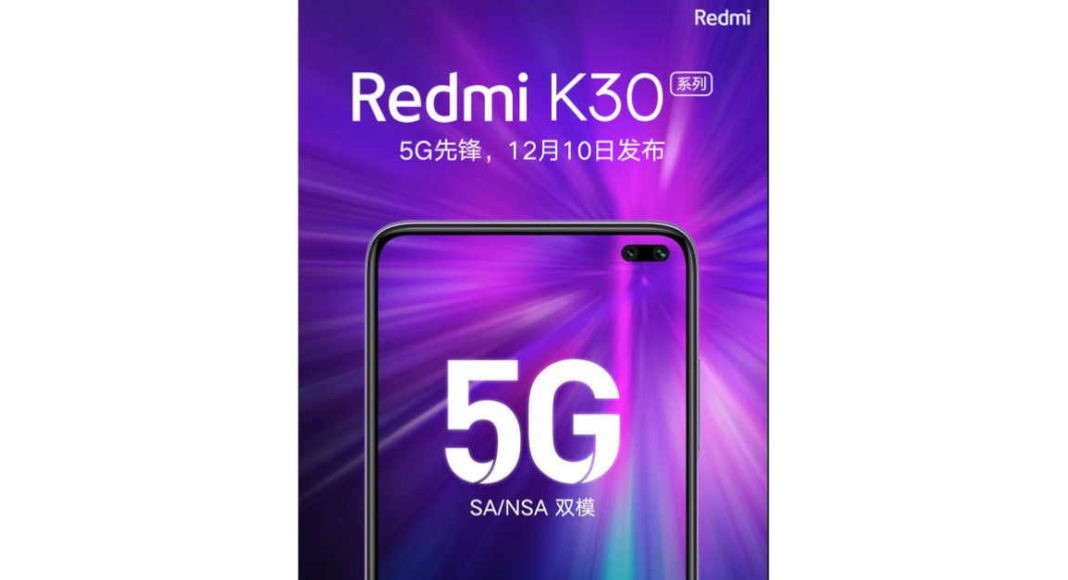 The 5G network globally is still growing. However, telecom operators internationally are working on ways to increase 5G network coverage in their countries. Dual Mode 5G includes both Non-Standalone access and Standalone access. Most 5G released by telecoms are for NSA 5G i.e. changes made to the 4G technology to achieve greater speed. The Redmi K30 is supportive of both NSA and SA, making for a smoother transition between the networks.

The Redmi K30 is the successor of the Redmi K20. Xiaomi has confirmed rumours that the Redmi K30 has a dual-punch hole camera display. The phone is also said to have a 60MP camera sensor and a side-mounted fingerprint scanner.

Rumours and speculations also suggest that the Redmi K30 is to come with MediaTek’s first 5G commercial smart chip. The Redmi K30 might have triple rear cameras with the primary one being a Sony IMX686 60 Megapixels.

Talking about its predecessor, the price of the Redmi K20 begins from Rs 21,999. The phone has a Qualcomm Snapdragon 730 processor with a 6.39-inch display with Corning Gorilla Glass 5. The phone has a triple rear camera setup of 48-Megapixels, 13-Megapixels and 8-Megapixels with a 20Megapixel Pop-up selfie Camera. The battery has the capacity of 4,000 mAh. The phone runs on MIUI 10 based on Android 9 Pie.

The other variant, the Redmi K20 Pro runs on the octa-core Qualcomm Snapdragon 855 processor clubbed together with the 8 GB RAM. The phone has upto 256 GB of internal storage with the same display, camera and battery as that of the Redmi K20. The Pro version of the Redmi K20 series is priced at Rs 30,999.

Achuuth Karthickhttp://www.gadgetbridge.com
The youngest member of Team Gadget Bridge, he is knowledgable Intern and loves his laptop and mobile phone. He cannot stay without them. He loves to talk about new consumer gadgets and has a bright mind.
Facebook
Twitter
WhatsApp
Linkedin
ReddIt
Email
Previous article
Huawei MatePad Pro with 10.8-inch touchscreen launched: All details inside
Next article
Oppo releases new ColorOS 7 in India: These smartphones to get it first