After Xiaomi Redmi Note 5 Pro saw a lot of success in Indian smartphone market’s budget segment, the company is all set to launch its predecessor in the country. And if you are a Xiaomi fan, we have some good news as the Xiaomi Redmi Note 6 Pro will be launching a few months earlier than what we were expecting. 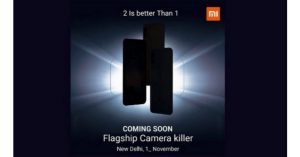 The first line on the media invite says “2 is better than 1”, which indicates that Xiaomi Redmi Note 6 Pro will feature a dual camera setup. With the line on the invite, “Flagship Camera killer”, we know that the company is touting the device as a photography centric smartphone.

However, the main highlight of the smartphone will be its quad camera setup. Xiaomi Redmi Note 6 Pro will feature 12MP and 5MP dual rear cameras at the back and 20MP and 2MP dual selfie cameras.

The camera app of Xiaomi Redmi Note 6 Pro will come with Portrait, HDR and Panorama modes and will have 1080p video recording.

The smartphone will house a 4,000mAh battery with support for Qualcomm Quick Charge 2.0. Although it will initially be launched in India with Android 8.1 Oreo skinned with MIUI 10, the smartphone is said to get an Android 9.0 Pie update soon.

Avani Baggahttp://www.gadgetbridge.com
Avani has an immense love for reading, travelling and food, but not necessarily in the same order. Avani almost started pursuing law, but life had other (better) plans for her and she chose to be a writer instead (luckily!) She previously covered technology at Times Internet and wrote about smartphones, mobile apps and tech startups. When she’s not writing, you’ll be able to find her in book stores or catching up on her social life.
Facebook
Twitter
WhatsApp
Linkedin
ReddIt
Email
Previous articleLuxury smartphone maker Vertu makes a comeback with its Aster P series
Next articleApple CEO Tim Cook urges Bloomberg for retraction of Chinese spy chip report