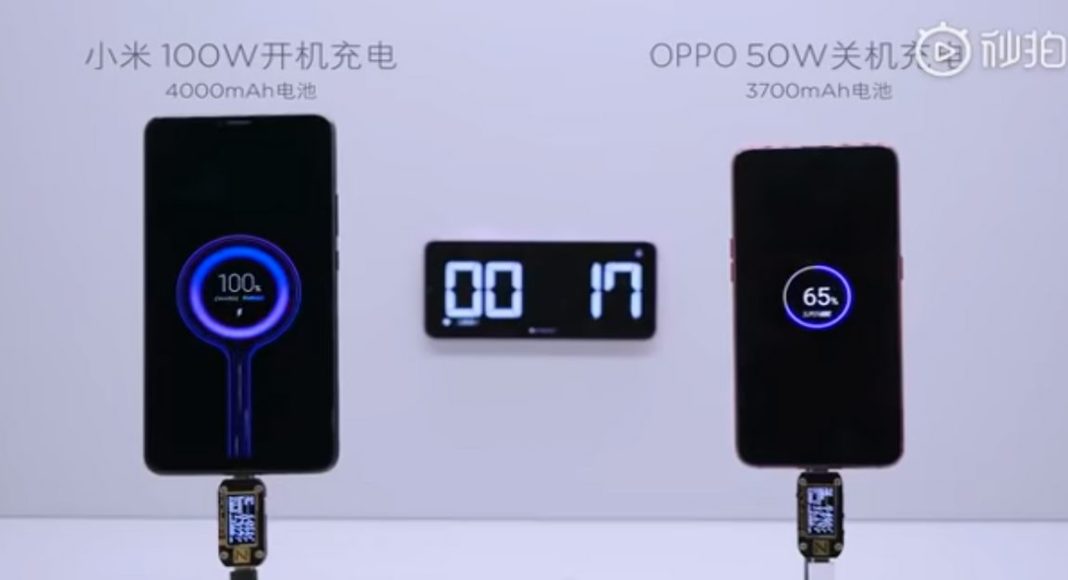 All of us are aware of the various smartphone battery-related issues that can arise and how much problem they can cause. Smartphone companies are aware of it too, and they are coming up with devices that pack heavier batteries that can last at least a day or more, However, with big batteries comes the time required to charge them fully. Try to charge a smartphone’s 4,000mAh battery with a regular charger and you will find out that it takes more than 3 hours to completely charge the handset. That’s where quick chargers come in, and today Xiaomi has taken a lead in developing a 100W fast-charger which is able to charge smartphone carrying a 3,700mAh battery from 0% to 100% in just 17 minutes.

A video was posted by the company on Chinese social networking platform Weibo that was spotted by XDA developers. The video was posted by Redmi’s General Manager Lu Weibing where it showcased Xiaomi’s new 100W charger charging a smartphone with 3,700mAh battery capacity alongside the Oppo’s 50W Super VOOC charger. The Xiaomi 100W charger managed to charge the device completely from 0% to 100% in just 17 minutes while at that time the other charger had managed to charge 65% of the battery.

We should mention that this is the fastest charger the smartphone world has seen yet and it is even faster than Oppo’s 50W charger which was one of the fastest chargers in the market till now. But Xiaomi didn’t comment on the 100W charger details and how does the new fast-charging technology works. But it should be noted that USB Type-C used in smartphones already come capable of supporting a 100W charger and the 100W power drawing capability. However, the problem with a larger power generating output charger is delivering the large amount of power from the charger to the small battery without the danger of overloading it and blowing it up. Currently it is not known how does the Xiaomi’s new charger works and how does it manages to not overload the device and the battery. It is worth noticing, however, that Oppo’s 50W Super VOOC Charger supplies half the power of the new Xiaomi’s charger. But even that much amount of power could overload the device to which the Super VOOC Charger came up with the solution by dividing the 3,400mAh battery into two separate 1,400mAh batteries and then charging them separately.

Till now, Xiaomi has made no comment on the charger or the possibility of bringing the charger for any of its devices. And it also hasn’t commented on the launch or announcement of the new 100W fast-charger. But since the video was posted by the Redmi GM, it can be assumed that one of Redmi devices might be the first to get the charger.

Aman Singhhttps://www.gadgetbridge.com/
Aman Kumar Singh has a Masters in Journalism and Mass Communication. He is a journalist, a photographer, a writer, a gamer, a movie addict and has a love for reading (everything). It’s his love of reading that has brought him knowledge in various fields including technology and gadgets. Talking about which, he loves to tweak and play with gadgets, new and old. And when he finds time, if he finds time, he can be seen playing video games or taking a new gadget for a test run.
Facebook
Twitter
WhatsApp
Linkedin
ReddIt
Email
Previous articleMi 9 vs Huawei P30: Specifications aren’t everything
Next articleLok Sabha Elections 2019: Facebook launches initiatives to boost civic engagement