HomeOther TechAppsYahoo Cricket launches daily fantasy game in India that has a prize...

Yahoo Cricket launches daily fantasy game in India that has a prize of Rs 1,00,000 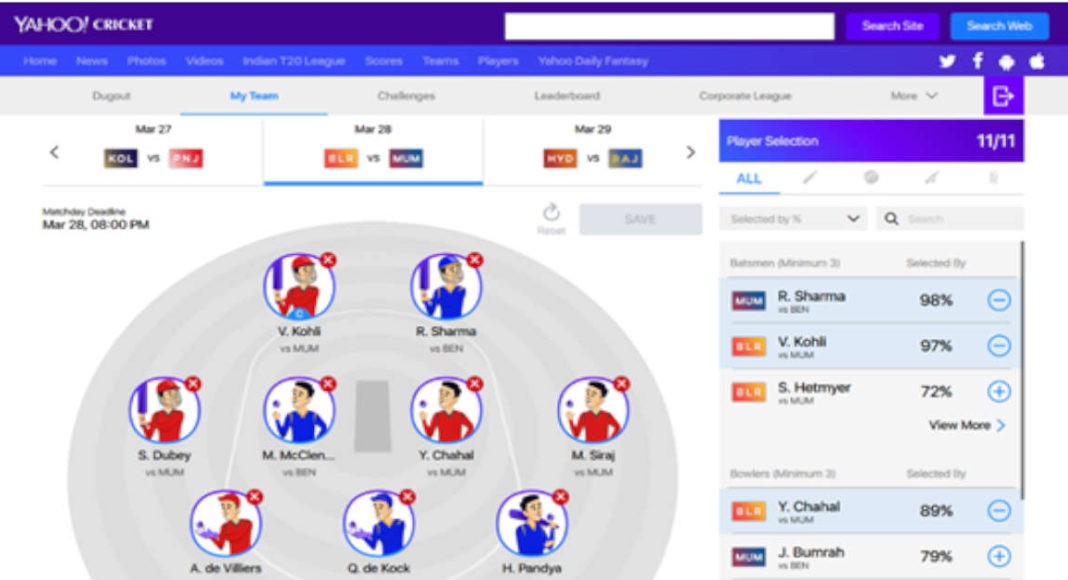 There’s some news for cricket fans in India. Yahoo Cricket, which is a part of Verizon Media, has played on the ongoing IPL fever in India and launched its Daily Fantasy Cricket Game. With the game, users can customise their teams based on the Indian T20 league daily matches. Winners would stand a chance to win vouchers worth Rs 7,500 per game day. The ultimate Yahoo Cricket Daily Fantasy winner will stand a chance to win the tournament price of e-vouchers worth Rs 1,00,000.

Fantasy Cricket has been gaining popularity in India very rapidly. We should mention that it is widely acknowledged as a game of skill, where users compete with each other on a virtual platform. However, the teams are created with real players. The game awards point to users on the basis of the real player’s performance during an actual match. Fantasy games are known to encourage fans to develop a deeper interest and involvement in the game, which leads to a surge in the overall engagement.

It is worth adding that currently around 40 million people in India play Fantasy Cricket and according to the company, the numbers are going up by the day. According to industry reports, the fantasy sports market in the country is expected to grow to 100 million users by 2020. Needless to say, companies are doing their bit to capture the growing market early on.

Yahoo Cricket Daily Fantasy experience is a lot like the game’s counterpart in the US counterpart. The company claims that Yahoo Fantasy Sports has been rated as the #1 Rated Fantasy App in the US, and is popularly known for its ‘player favourite’ features. The game has a fan-first approach which, according to the company, helps it in maintaining its track record of “serving up innovative and award-winning fantasy experiences and products.”

Yahoo Cricket has also added that cricket lovers in India can expect the same winning experience, but it will be localized according to their tastes and preferences. The game is said to come with features that create an immersive experience for fans. Players will be able to create and manage their own game day cricket team, challenge friends to play and track who tops the leader board. The Daily Fantasy Cricket also offers a ‘corporate league’ option, which amplifies the fun for larger groups.