Read below to know all about it. 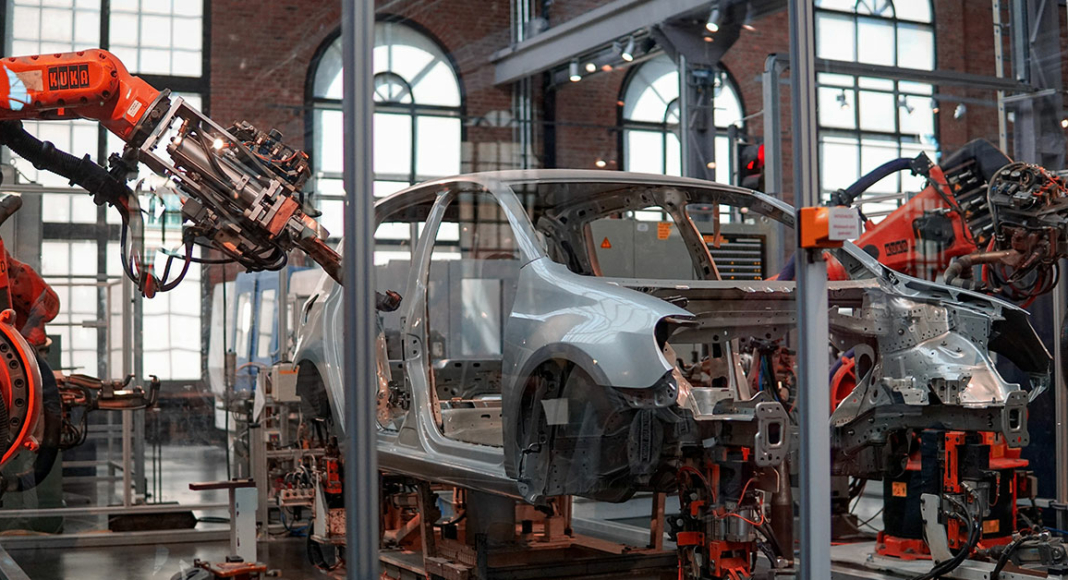 Collaborative robots are transforming the manufacturing industry in the 21st century. Robots are a popular choice for manufacturing companies because of their flexibility and ease of use. The vehicle industry is one such industry that robots have revolutionized.

Robots are a middle ground between human work and traditional machines. Learn in this article the benefits they bring and how they give an edge to businesses and make them more efficient.

What are Collaborative Robots in Automotive Manufacturing?

Robots are computer-controlled machines that perform specific tasks in a factory environment. Collaborative Robots (Cobots) are operable by human beings in a work cell, and they resemble human motion with their articulated arms and hands. Collaborative robots design lets them work alongside humans in the workplace using sensors and safety protocols and work without posing a threat. Automotive robots perform tasks considered dangerous for humans.

The latest robots use a suite of special sensors to navigate the factory and communicate with their human counterparts. The most impressive thing about automotive robots is that they can detect humans and stop or slow down instantly when they sense movement. Thus, they are much safer than traditional industrial robots that move very fast and don’t always know if they are in the path of humans.

The automobile manufacturing industry integrates robots in almost every aspect of an automobile’s manufacture. Auto companies worldwide use collaborative automotive robots for many tasks like welding, painting, and assembly.

Automotive robots play a crucial role in the development of autonomous cars. These robots help in many ways within each stage of vehicle production—from designing and machining prototypes to assembling.

In welding, robots eliminate human error and increase quality by completing precise welds in a highly productive manner. The automotive robots accomplish these tasks by using cameras that provide visual inspection and sophisticated scanning technology that eliminates the possibility of a missed spot on the part that needs welding. As such, the combination allows the robot to use precise movements to mimic those made by an experienced welder with years of experience.

Robots now play a more significant role in painting tasks. Moreover, instead of having workers stand for long hours and work with harmful solvents to paint car parts, robots spray paint onto the parts at high speed. As a result, they produce better quality work while allowing the workers to focus on other tasks.

Automotive robots paint all kinds of automobiles and perform other tasks of the process, including sanding, buffing, and polishing. The tasks are dangerous to humans, but robots accomplish them faster without endangering workers’ lives.

Automotive robots are already playing a role in quality inspection thus, eliminating human error by detecting defects more efficiently than humans. In addition, advances in technology have made it possible for robots to perform their duties with precision. For example, infrared cameras can detect defects that are invisible to the human eye. These cameras send data on defects directly to a computer or mobile device. And when combined with machine learning software, this data can be used to teach robots how to detect different types of defects in the future.

The assembly of cars or other vehicles typically involves attaching parts and components. Assembly is one step in a production line, and its tasks are organized by the type of vehicle or the part being worked on. The tools and machinery used for assembly are highly specialized, with some designed for specific tasks such as car doors, windshields, and several other tasks.

The use of automotive robots has been increasing in the manufacturing of vehicles in recent times. Here are some benefits of using industrial robots in car manufacturing.

Automotive robots increase efficiency in car manufacturing processes by performing multiple tasks at the same time. The application of such robots has helped major car companies in boosting efficiency.

Automotive robots enhance safety when working around heavy machinery or other dangerous environments. The robot’s programming has increased awareness of potential threats that may prove fatal to humans, such as moving parts or molten metal.

Robots eliminate repetitive stress injuries due to performing the same task repeatedly, which is a common problem in manufacturing facilities that use human labor. In addition, they handle more complex tasks than humans can and allow the employees to focus on specific tasks that need urgent attention.

There are robots for lifting both heavy and small components, hence the flexibility to work with different types of machinery and perform various tasks. Robots are strong and can lift heavy objects without hurting their back or hurting themselves in any way. If a human worker manually picks up each object and places it onto the conveyor belt, he would need several weeks to complete one task.

The Future of Automotive Robots

The auto industry is undergoing rapid changes. As the popularity of autonomous driving increases and the world becomes increasingly digitized, auto manufacturers are facing some challenges.

There are many exciting happenings in the world of robotics, particularly in the automotive industry. As a result, there’s a lot on the horizon for vehicle automation, from self-driving cars to robot valets.

Many are investing in new technologies to meet customer demands, including artificial intelligence (AI), machine learning (ML), computer vision, and deep learning. With the increasing demand for vehicles and the growing number of accidents, future robots will efficiently produce safer cars.

In the auto industry, robots help in different aspects of the manufacturing process. They play a crucial role in final assembly, working alongside human workers to produce car parts. They also prepare and paint vehicle bodies and weld pieces together.

Collaborative robots, also known as Cobots, are semi-autonomous, interactive robots designed to work side-by-side with human workers. Employing robots in automotive manufacturing is the best way to move the industry forward. As expected, the future robots would be social and appealing to humans.

Industrial robots apply throughout the world in the manufacturing of automobiles. Such robots can perform a variety of tasks, including welding, painting, riveting, and assembling.  Automotive robots can be programmed to continuously handle a wide variety of tasks for extended periods without getting tired or fatigued. In addition to this, these robots can be easily supervised by an employee when necessary because they have built-in safety and warning devices.